New chairman for state board plans focus on safety 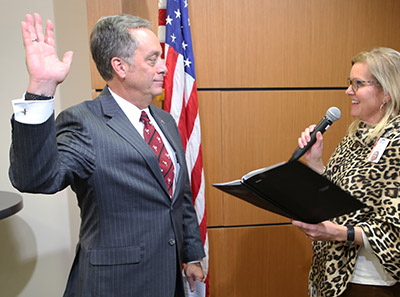 A North Litchfield resident is now chairman of the state Board of Education.

Alan Walters, who is executive director of safety and risk management for the Georgetown County School District, plans to focus on school safety during his two-year term as chairman.

“I want to use this position to advance some big safety initiatives over the next year,” Walters said. “We want to try to get some consistent standards across the state.”

Walters is working with the governor and legislature to get school resource officers in every school.

“That is going to be a big topic I’m sure at this legislative session,” Walters said.

Georgetown applied for some of the state funding that is available since some of the officers it currently uses are part-time.

Almost every session features a bill requiring metal detectors in every school.

“The equipment cost is substantial but the personnel cost to run them is staggering,” Walters said.

The state board is made up of representatives from the state’s 16 judicial circuits, plus one person appointed by the governor. Walters was appointed in 2019.

“It gives you the opportunity to do some things statewide and work with the legislature and deal more with the big picture of education,” Walters said.

He was voted chair-elect by his fellow board members last year.

“It’s a big honor that my colleagues saw enough in me last year to want to do that,” Walters said. He will serve as chairman for two years until his term on the board is complete.

One of the duties of the state board is to oversee teacher licensing hearings.

“If a teacher is brought forth with a professional misconduct charge or breach of contract charge, we’re the body that decides if their license gets suspended or revoked,” Walters said.

The board is also responsible for approving new textbooks.

“Some of the [new] textbooks, Social Studies in particular, we weren’t happy with them,” Walters said. “So we asked that they be sent back and reviewed further and possibly edited to better fit South Carolina’s standards.”

During the most recent round of textbook review, there were 58 pages of public comments.

“A lot of public comment tends to lean toward someone’s political beliefs, across the political spectrum, not one side more than another,” Walters said.

Along with his duties on the state board, Walters served on the state’s AccelerateED Task Force, which was created in the spring of 2020 to come up with a plan to reopen schools safely for the 2020-21 year during the COVID-19 pandemic.

This is state Superintendent Molly Spearman’s last year in office.

“I know she has a lot of things she wants to get done this year,” Walters said. “At the same time, you’ll have a lot of candidates out here seeking to replace her. It’s going to make for a lot of activity and a lot of things going on this year.”

Walters was hired by the school district in 2014.

Before that he was a magistrate in charge of the county’s central traffic court, an officer with the Georgetown Police Department, and a deputy with the Sheriff’s Office.