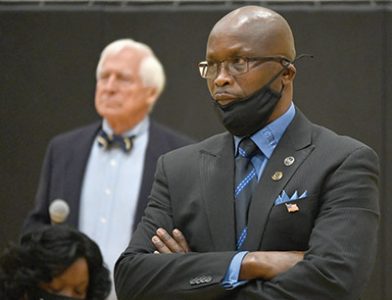 Marvin Neal, right, and Bob Anderson clashed over the previous map at a meeting this week.

A new redistricting plan for Georgetown County Council  emerged this week after a series of public meetings ended with a heated exchange between a council member and the head of the local NAACP chapter about the fate of minority representation.

“We are making adjustments to the maps as we speak,” County Administrator Angela Christian told about 30 people at a public input session Monday at the recreation center in Parkersville.

She introduced a new map to the council the next day.

County Council is due to take comments on the latest map at a meeting Wednesday before holding a public hearing and giving final approval to the redistricting plan on Feb. 8.

The redistricting is required by law after every U.S. Census to ensure that each of the seven council districts represents about the same number of people. After the 2020 Census, Council Member Steve Goggans in District 6 represented almost 11,000 people. Council Member Lillie Jean Johnson in District 4 represented just over 7,600.

After redistricting, each council member will represent about 9,000 people.

The county contracted with the state Office of Revenue and Fiscal Affairs to draft two preliminary redistricting plans. Frank Rainwater, director of the agency, told council last fall it would be a challenge to maintain the three Black majority council districts. The county’s Black population was 29 percent in the last census, or two-sevenths of the total.

Both of those maps moved DeBordieu from a Waccamaw Neck district to District 4 in Georgetown. They also kept areas around the city of Georgetown in District 2, represented by Bob Anderson, and divided Murrells Inlet between Districts 1 and 6.

The council drafted a new map with its GIS staff. It provided three council districts wholly on the Waccamaw Neck.

But the Black population of District 4 was cut by more than half, to under 23 percent.

“That’s not balanced,” Neal said. “That is not acceptable.”

He said the county was taking advantage of a Supreme Court ruling that ended the practice of having election districts in South Carolina approved by the U.S. Justice Department before they were adopted.

He blamed Anderson for pushing the idea of two Black majority districts. That was a “narrative for white people,” Neal said.

“You called me a racist,” Anderson said.

“Well that’s what you are,” Neal replied.

Council Chairman Louis Morant interceded. “This is not the final map,” he told Neal.

Neal said the county should have presented the alternative maps from Fiscal Affairs to voters.

Helen Davis of Murrells Inlet asked why one of those alternatives, known as Map 777, was rejected.

She favored the map of District 1 that extended from the Horry County line to North Litchfield because it kept all of the Murrells Inlet marshes in the same district.

“Overall in the county, Map 777 didn’t meet all the goals the county had,” Administrator Angela Christian said. “It’s a compromise.”

The current proposal uses Brookgreen Gardens as a dividing line between Districts 1 and 6, Goggans said. But the population of Murrells Inlet is larger than the target for each council district, so a portion of the community is still in District 6.

“Murrells Inlet now has not one, but two future council people who have an interest in Murrells Inlet versus, historically, one at best,” Goggans said.

Goggans and John Thomas in District 1 don’t plan to seek re-election this year. Both were drawn out of the districts they currently represent, but will serve out the rest of their terms.

The three districts on the Waccamaw Neck are unchanged.

Christian said that the previous map had raised concerns with officials at Revenue and Fiscal Affairs because it put the Black population in District 3 at 70 percent.

That left the county open to a challenge under the federal Voting Rights Act that it was “packing” minority voters into a district to dilute their influence.

The county has produced about 100 maps during the process, Christian added.

Marilyn Hemingway, founder of the Gullah-Geechee Chamber of Commerce, said at the Monday meeting that maintaining the minority influence in District 4 is important.

“Then it is up to the voters on representation, and maybe the elected officials will get out and work for those votes,” she said.

The county will take public comment on the latest map Wednesday at 6 p.m. at the Howard Center in Georgetown. The map and the meeting can also be viewed at georgetowncountysc.org.