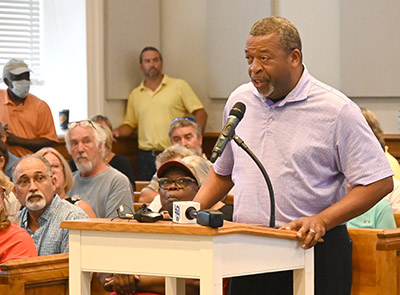 The Rev. Johnny Ford started the Parkersville Planning and Development Alliance after speaking out against townhouse projects in the area last month.

The Rev. Johnny Ford and the community where he lives and works isn’t against change.

“We want it done the right way,” he said.

He has proposed that Georgetown County give land it bought for a technology park to Habitat for Humanity rather than sell it to a developer who wants to build 90 townhouses. That would meet the county’s need for affordable housing and help maintain the character of the surrounding neighborhood of single-family homes, Ford said.

The Planning Commission will hold a hearing today on a request by the county Economic Development Alliance to amend the “planned development” zoning for 14.5 acres on Petigru Drive to allow the townhouses. The property was bought by the county in 2016 to create a tech park anchored by Mercom, which planned to build a new headquarters on a portion of the site. Those plans were scrapped when the company ran into financial problems.

The alliance, a nonprofit controlled by the county, used a $950,000 loan from Santee Cooper to buy the property. It looked for other buyers that would bring economic development to the site.

In 2020, Graycliff Capital Partners offered $1.4 million for the property and proposed 182 apartments, similar to ones it has developed in Litchfield and Murrells Inlet. The Planning Commission recommended denial, and Graycliff withdrew its application for a zoning change before it came up for a vote by County Council.

The request for 90 townhouses follows proposals for two other projects totaling 109 units in the Parkersville area, a traditionally Black community. All the proposed townhouses are three-bedroom units.

The plan for the tech park is for rental units, said Dan Stacy, the attorney representing the alliance. There will be 18 units rented below market rates as affordable housing.

After public hearings on the other townhouse projects last month, Ford created the Parkersville Planning and Development Alliance.

“It really became personal,” he said. “I felt residents needed to be heard.”

The alliance has the support of area churches and the Pawleys Island Civic Club, he said.

In one of his first acts as alliance president, Ford and his wife, Lynne, who is a member of the school board, wrote County Council to propose a solution to the problem they see with the rezoning of the tech park.

“We are deeply disturbed that by the fact that our community has been taken advantage of for many years (with no apparent end in sight) and on many levels, including land use decisions,” they wrote. “We propose that County Council make a positive investment in this community to preserve and protect the county owned land on Petigru.”

Habitat for Humanity would provide “decent, affordable housing for low-income residents,” they said.

Ford said he once served on the Habitat board and said that organization would ensure that homes were created for people in need.

Laura Gassler, the executive director of Habitat in Georgetown, hadn’t heard of the proposal.

“We’re definitely always looking for land and partners and sponsors,” she said. “We’ve looked for property in Pawleys Island. A church has looked for land to buy and donate. It’s unaffordable.”

Habitat has about eight lots available for new houses.

If the tech partk property were developed as medium density, it could have about 40 houses. Habitat can build four to five homes a year, Gassler said, using a paid construction manager and volunteer labor.

“We really can’t afford to hire more people,” she said. “We would not build it out as quickly as a commercial builder.”

Another drawback for the nonprofit is that it doesn’t have the money for roads, utilities and other infrastructure. “We can’t carry the debt service on something like that,” Gassler said.

Ford said he received no response to the letter, which he sent last week. He plans to make his pitch at today’s Planning Commission hearing.

Cindy Person, attorney for Keep It Green Advocacy, said she likes the Habitat option, but said it hinges on blocking the current rezoning request.

She will represent the Parkersville alliance as well as other citizens groups at the hearing. Person said the request “raises a multitude of serious legal issues.”

Those groups have already threatened to sue the county to bring its zoning ordinance into compliance with the land-use element of its comprehensive plan. Approval of the tech park zoning change is also likely to lead to legal action, Person said.

The opponents argue that the “planned development” zoning for the tech park is no longer valid because the county ordinance requires work to start within two years. That didn’t happen and no extensions were granted, Person said.

After the Graycliff application was withdrawn in 2021, Keep It Green asked the county to revert the zoning to “forest and agriculture,” the district that applied before the “planned development.” The county didn’t respond, Person said.

She also questioned the proposal for reduced rents on 18 units.

“This appears to be an attempt to appeal to a community that has a real need for affordable and workforce housing,” Person said. “This project benefits the developer and the county, not the community.”

The commission meets at 5:30 p.m. in County Council chambers in the courthouse.