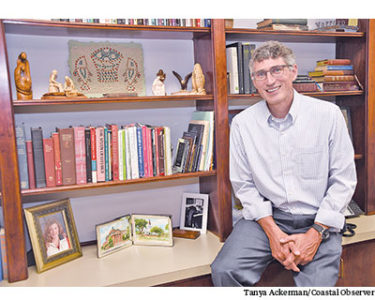 The Rev. Will Malambri arrived at Belin Methodist last month.

There is a new man leading the faithful of Belin Memorial United Methodist Church for the first time in 14 years. Will Malambri was installed as senior pastor on July 14.

So far he and his family have found the congregation “warm and receptive.”

“We’re thankful for that,” Malambri said.

Malambri is grateful that the Rev. Mike Alexander, Belin’s former pastor, prepared the congregation for the change.

“He was really wonderful to say ‘you’re going to love your new minster and his family’ and to build me up in their eyes,” Malambri said. “I felt that they love him and are grateful for the ministry he provided here, but they also seem genuinely glad that I’m here.”

Malambri has been walking around wearing a name tag and has encouraged the people in the congregation to do the same thing to help him learn everybody’s names. He’s met members, frequent visitors, infrequent visitors and occasional guests.

“There’s a little bit more variety here that makes putting faces and names together a little harder,” he added.

“Almost always, you’re done with a church once you get moved,” Malambri said. “That’s a very unusual occurrence.”

Belin is the 18th fastest growing United Methodist Church in the United States and Malambri is trying to learn what it needs.

“I don’t want to come in here thinking I know what Belin needs,” he said. “There are basic things that every church needs and deserves, but Belin is its own unique congregation and what they need will be particular to what they are.”

The church is planning an expansion, which will include widening and lengthening the sanctuary. A large building with offices, a children’s wing and worship space is also planned for the fenced-in lot that now accommodates overflow parking. Plans also include shifting the driveway for the public boat landing parking lot that currently bisect the church property on the west side of Business 17.

“I’m trying to get up to speed in what is a big, important and necessary building project,” Malambri said. “It’s a learning curve I’m still on the first part of.”

Malambri was born in North Carolina. His family moved to Gaffney when he was about 7 months old and Rock Hill when he was 3.

“For my entire life in their home, church was part of it,” Malambri said. “It was an expectation that we would be there if we weren’t sick, and if we said we were too sick to go on Sunday mornings, it meant we were too sick to do anything else Sunday afternoons.”

Malambri sang with the choir, attended Sunday school, took part in children’s programs and was a member of the youth group. That all laid the foundation for him becoming a minister.

When he was at Northwestern High School, Malambri got involved with Salkehatchie, a home repair ministry for youths, and attended Chrysalis, a weekend retreat for teenagers.

“I felt a closeness with God that weekend and wanted to have others experience that kind of thing,” Malambri said. “I felt a forgiveness that I felt was joyful. A lifting of my spirit.”

Sometimes when Malambri would lead a Bible study or do service work for the church, people would tell him they thought he would become a pastor.

“I was feeling something internally, but others were affirming it externally even without knowing that I was feeling that,” Malambri said.

The combination of the three led Malambri to tell his mother he was considering becoming a minister.

His mother was supportive, but asked that he not make a decision until he got out of college. Malambri enrolled at Wofford College and got involved in ministry on campus.

After he graduated a pastor convinced him to enroll at Duke Divinity School by telling him it didn’t necessarily mean he had to become a pastor. It might just be three years of making great friends and deepening his faith

“I went into divinity school thinking I was called, but not feeling like I had to,” Malambri said.

Once he started practicing ministry as an intern, he realized he loved the day-to-day work. Every day is unique, Malambri said.

“I think that variety is life-giving for me,” Malambri added.

One thing that gives Malambri joy is helping someone initiate or dig deeper into discipleship.

Malambri and his wife, Sally, have two children – Mac, 14, a rising freshman at Socastee High School, and Annagray, 11, a rising sixth-grader at St. James Intermediate School – and a mutt named Duke.

The Malambris both run and compete in marathons. The family likes to do things outdoors, like cycling, backpacking and travel.

Malambri loves where he works and said his fellow pastors are envious of both the church and the setting.

“To walk out to my car at the end of the day and smell the marsh and look across and see the inlet, it’s a beautiful place to get to do ministry” he added.