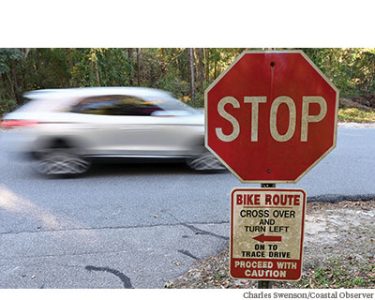 The sections of the Bike the Neck path that end at North Litchfield direct cyclists onto neighborhood streets.

Georgetown County will try again to get a $100,000 state grant to complete a key section of the Bike the Neck route that was denied last year. It is the same grant that the county had to return to the state Department of Parks, Recreation and Tourism in 2014 because it wasn’t able to obtain easements for the route.

The North Litchfield connector will link the existing Bike the Neck path at Boyle Drive with the segment that runs north through Huntington Beach State Park. It will run beneath the Santee Cooper transmission lines.

Only the amount of the PRT grant has stayed the same.

As part of the grant process, the county will hold a public meeting Dec. 11 at the Waccamaw Library to explain the project. “We get points for advertising it, hosting it and being there,” Coley said.

The project has been a long-standing priority of the Litchfield Beaches Property Owners Association. Cyclists now have to use Lakeshore Drive through North Litchfield as a link between the Bike the Neck route, and traffic that was already busy along the street when the connector was first proposed has only increased.

The association earmarked $40,000 for the connector, an undisclosed portion of which was used to pay for easements that some owners along the power line wouldn’t grant for free. Santee Cooper’s easement is only for maintenance.

The last easement was acquired in December 2018, but PRT had already turned down a grant request because the county didn’t have the easements.

The grants are now on a two-year cycle. The county has until Jan. 31 to apply. Awards will be announced in April.

The county will match the grant with a portion of the $500,000 set aside for bike paths in its capital improvements plan.

“All the access, easements and agreements with the utilities are in place,” Coley said.