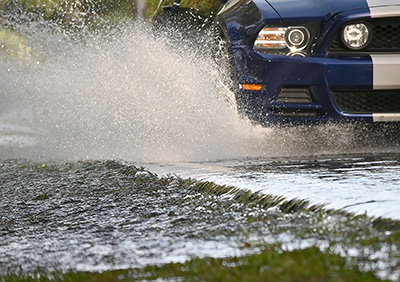 Water flows over Martin Luther King Road after a month of heavy rains.

An effort to find matching funds to buy flood-prone houses ended up creating a new state agency. Gov. Henry McMaster signed legislation this week creating the Office of Resilience along with a revolving loan fund for the buyouts.

The agency will be led by a chief resilience officer and be charged with creating a plan to reduce losses from disasters caused by “extreme weather events.”

“It’s what a responsible state that has a major exposure does to coordinate federal funding,” said Pam Marting, a professor at Coastal Carolina University and executive director of Georgetown RISE, a partnership that works on resilience, innovation, sustainability and education.

The bill also requires local governments to include a resilience element in their state-mandated comprehensive plans. Both Georgetown County and the town of Pawleys Island are in the midst of updating their plans.

“There’s clearly a need along the coast right now,” said state Sen. Stephen Goldfinch who introduced a bill in 2018 to create the buyout fund.

The Federal Emergency Management Agency, which runs the federal flood insurance program, has a grant program that will pay 75 percent of the cost for local governments to buy houses from owners who have repeated losses. The state loan fund will help cover the remaining 25 percent.

“There are repeat-loss properties ready to go,” Goldfinch said. “Just in my district, there were 500 or 600 that were eligible.”

Although the bill passed in a special session last week, the legislature did not pass a budget. It is operating under a continuing resolution, so no funds are available for the loan fund.

“I can’t imagine we’re not going to see money next year,” Goldfinch said.

After the Senate passed the bill creating the loan fund, Goldfinch said he got a call from Rep. Murrell Smith, who chairs the House Ways and Means Committee. Smith wanted to combine the state’s Disaster Recovery Office with flood mitigation efforts launched after Hurricane Florence. And Ways and Means was reviewing the revolving fund bill.

“I was opposed to the idea. Not on the merit; strategically, I thought it would fail,” Goldfinch said. “I was wrong.”

“The biggest fight was you’re creating another government agency and another director for it,” he said.

While the state Conservation Bank also buys and protects property, it deals with large tracts. The revolving loan fund will focus on neighborhoods, Hewitt said.

The flood losses are not only from hurricanes, he noted.

“In Socastee, there have been homes that have been flooding this summer,” Hewitt said.

The law requires the buyouts to focus on blocks of homes rather than individual homes. Primary residences will also get priority, so will homes whose owners are low- or moderate-income households.

Property acquired with the loans has to be returned to open space and future development restricted by easements or covenants.

“We don’t have another choice. There are already properties that are continuously flooded,” Martin said.

Georgetown RISE, which includes the National Estuarine Research Reserve at Hobcaw Barony and local government, has already established a resilience task force. “It would be prudent for Georgetown County to start identifying areas of buyout,” Martin said.

The Office of Resilience will be able to operate with funds already approved for the state Disaster Recovery Office, which was created in 2016, Goldfinch said. The recovery office will become part of the resilience office.

The governor will appoint the resilience officer with the advice and consent of the Senate.

The office will continue the work of the S.C. Floodwater Commission, created after Hurricane Florence in 2018. Part of its work will involve improving data collection, something that was found lacking when models created for the state Department of Natural Resources predicted catastrophic flooding along the Waccamaw Neck and Georgetown during Florence.

Instead, the wetlands along the county’s rivers absorbed much of the floodwater.