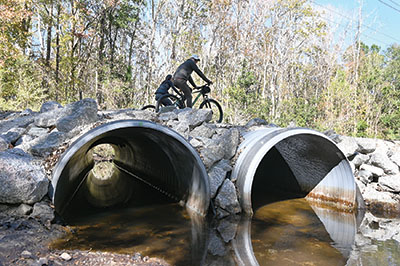 Cyclists cross a wetland along the North Litchfield connector.

The Bike the Neck path has ended up where it began.

A ceremony Friday will mark the completion of the latest phase of the route that was envisioned 25 years ago running from the county line at Murrells Inlet to the Highway 17 bridges to Georgetown. The North Litchfield Safety Connector runs from Boyle Drive to Trace Drive under the Santee Cooper transmission lines.

The first phase of the route was completed in June 1997. It ran from Boyle Drive south to Providence Drive.

“I don’t know that it worked,” Ketron added. “There was a strategy to it.”

There is now a continuous route from Murrells Inlet to Waccamaw Elementary School. Only one gap remains: between the school and the portion of the path that runs along Highway 17 to the South Causeway. A sidewalk along Waverly Road is due to be replaced with a bike path using funds from Georgetown County’s capital improvement sales tax.

The first phase of Bike the Neck opens in 1997. Linda Ketron is at left.

It took that long to get the North Litchfield connector finished because property owners wanted to be paid to provide an easement for the path. The county won’t pay for easements. Bike the Neck had to raise the money. The Litchfield Beaches Property Owners Association gave $40,000 for the connector. An unspecified portion was used to buy easements.

“Raising money to pay people for a sliver of land, something 10 feet wide across the back of the property, wasn’t the spirit in which we started the whole thing,” Ketron said.

Because that process took time, a $100,000 state grant for the connector expired. The state then moved to a two-year grant cycle. The state approved a new grant in April.

The delay also saw the cost of the project increase, in part because the state increased the required width of the path from 8 to 10 feet. The project that was first planned at $144,000 came in at $196,715 when work began this summer.

Work was completed last month. Walkers and cyclists didn’t wait for the contractor to remove his orange cones.

“This is fantastic,” said Sean, a cyclist who lives off Tournament Boulevard in Horry County and who didn’t want to give his last name.

He rides south along the route about five times a week. Before the connector was built, he stopped at Trace Drive rather than right through the streets in North Litchfield.

“It was too crazy going through the streets,” Sean said. “I ride on the bike path.”

Since the connector opened he has ventured as far as Waccamaw Elementary.

The route through Huntington Beach State Park is the most scenic part of the Bike the Neck trail. People regularly park on Trace Drive to access that portion of the path. The connector project provided paved parking on the road shoulder.

Penny Tucker moved to North Litchfield last spring, and her house is adjacent to the connector. “I love it,” she said. “It’s easy access.”

The path crosses wetlands between Trace and Boyle. Despite the transmission lines, it has a rustic feel.

Tucker was out walking her dogs over the weekend, but she has a bike at home. “I’m going to get to do some biking,” she said.

Ketron also lives at North Litchfield. She walked the path on Christmas Day. She has tried to be impartial in deciding the route and the priorities.

“My neighbors in North Litchfield feel like I have ignored it for way too long,” she said.

While this 3,145-foot portion of the path has been long on frustrations, Ketron is pleased with the result.

“This will be the final spike in the railroad,” she said.

The dedication will be held at 1 p.m. Friday on Trace Drive, where the path leaves the state park, with coronavirus precautions will be observed.