Nuts for parks? You’re not alone 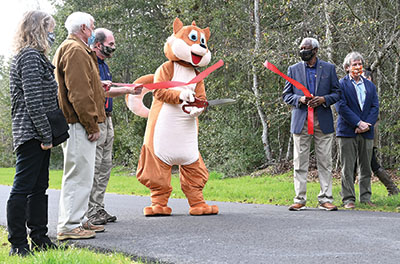 Forrest the Squirrel made his debut at the Bike the Neck ribbon cutting.

Forrest the Squirrel has emerged from the coronavirus pandemic ready to run.

The new mascot for the Georgetown County Parks and Recreation Department made his debut last week at a ribbon cutting for the Bike the Neck path’s newest section. He got the honor of wielding the scissors.

“It’s fun actually,” said Loren Wallace, the recreation manager who emerged from the brown squirrel suit after the event.

It was only afterward that the staff realized Forrest had mistimed his appearance. Jan. 21 is actually Squirrel Appreciation Day.

“Someone who watched the ribbon cutting pointed that out,” said Beth Goodale, the director of Parks and Recreation.

The mascot emerged as the department looked for ways to engage residents while some of its programs were curtailed by the pandemic. Forrest will have a full schedule as the weather warms and outdoor programs start.

Forrest comes with a furry suit and a slogan: “Nuts about parks and recreation.”

Forrest will also lead virtual activities and make himself available to booster clubs for events.

“We were trying to look for something that was common across the county,” Wallace said.

A gray squirrel was the first choice, but the costume was “not as cuddly,” he said.

“It was kind of scary,” Goodale said. “The brown squirrel was the cuter squirrel.”

She isn’t too concerned about the biological aspect of the mascot. “He’s a fictional squirrel,” she said.

But Wallace has already embraced the role.

“He loves being Forrest. He isn’t going to give that up,” Goodale said.