Once 3rd rail of town politics, property tax on the table – Coastal Observer

Once 3rd rail of town politics, property tax on the table 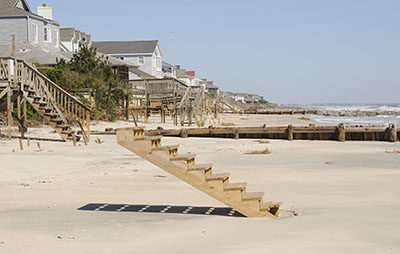 The town needs away to pay for future beach nourishment projects as well as its operations.

Pawleys Island property owners will have their first serious discussion about a property tax since the town was formed over 30 years ago. It will be part of what town officials call a “holistic approach” to the red ink that is forecast to wash over their budget like Pawleys Creek in a spring tide.

“This is not something I or anyone on council ever wanted to bring up,” Mayor Jimmy Braswell told about 20 property owners who showed up at a meeting this week to hear discussion about a business license fee.

But after some owners and council members questioned the fairness and efficiency of the business license, the council agreed to expand the discussion.

Council Member Sarah Zimmerman said she would be willing to pay a flat annual fee if the money was earmarked for beach renourishment.

“We need a holistic approach,” Council Member Guerry Green said, adding that would also include spending.

The town will see its $800,000 operating reserve dwindle to about $35,000 over 10 years at the current rate of spending unless it finds more revenue, according to a forecast by Administrator Ryan Fabbri.

The town has never had a property tax. State and local taxes on vacation rentals account for 41 percent of the revenue in the town’s current budget. Taxes on phone lines and insurance premiums collected for the town by the S.C. Municipal Association account for another 19 percent of its $1.9 million in revenue.

“We have graciously been allowed to operate the town on the accommodations tax,” Braswell said. “Today, there is a problem.”

The town is considering a business license because under state law it cannot adopt a property tax rate without approval from the General Assembly. Although the town only has two inns that are considered commercial activity – both grandfathered under the zoning ordinance – a business license would be required for people to rent their houses. It would also be able to require companies located off the island to get a license to do business on the island, such as contractors and beach services.

Of the 271 cities and towns in the state, 220 have business licenses, said Scott Slatton, public policy advocate for the Municipal Association. That includes the town of Seabrook Island, which, like Pawleys Island, has no property tax.

The rate that a business pays would be determined by its IRS classification and a “profitability index” the agency updates every two years. The town would assign a base fee and a percentage for sales above a certain level in eight different rate classes. “It’s left to each city and town to determine who is doing business,” Slatton said.

Glenn Kornahrens, a property owner in the Bird’s Nest section, said “the math is not going to work.” The issue isn’t the $150, “I throw out more warm beer than that,” he said.

The town plans to participate this year in a Corps of Engineers project that will place offshore sand on 1.4 miles of beach. The town will pay 35 percent of the cost, which has not been determined. Every nine years afterward, the town will split the cost of maintaining the new beach with the federal agency.

The town won’t be able to match the maintenance cost without more money, Kornahrens said. “We have to protect the most important asset we have on this little strip: the beachfront.”

A business license that brings in $120,000 a year would take 90 years to cover the cost of the beach work, Green said. “All it’s doing is paying the operating expenses we’re incurring.”

Kornahrens also argued that the business license is unfair because only property owners who rent their houses would pay to support the town.

She asked for a show of hands of those willing to pay a flat $300 fee for beach renourishment. “They would write the check tonight,” Zimmerman said, looking over the raised hands.

“I’m not in favor of it,” Sumter Moore, a north end resident, said. But he said he would pay it and it would be easier for the town than trying to administer a business license, which Fabbri said would require an additional person.

“All of this is uncharted territory,” Fabbri said, and while a business license alone won’t cover all the town’s needs, it is the only available option. “Property tax, the one thing people are clear about is they don’t want it.”

Council Member Ashley Carter said that was the sentiment when he talked to voters during his first run for office in 2015. “We tried to do anything possible to avoid that,” he said. “A business license isn’t a cure-all, but it will help.”

The business license is “kicking the can down the road,” Braswell said. “Somewhere it’s going to have to be a millage.”

Braswell proposed a public forum on the town’s finances. Former Mayor Bill Otis said it needs to be “a broader discussion of income and expenses over the next 10 years,” adding “that puts everything on the table.”

The council agreed to send out a survey to property owners to gauge support for a property tax and business license and form a committee of council members and owners to review the financial options. A town meeting on the topic will be held April 20, the Saturday before Easter.