Once a protest candidate, times changed for Steve Goggans 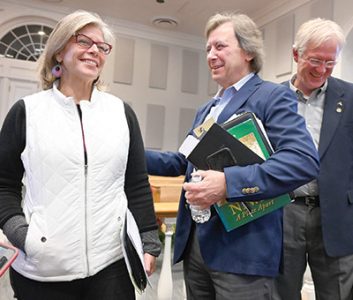 Steve Goggans wishes luck to his successor, Stella Mercado, as he leaves his last council meeting.

Steve Goggans was among the performers when Clemson University held its first guitar festival last spring. “It was quite humbling because there were world class musicians that were visiting,” he said.

He played two pieces on stage at the university’s Brooks Center, one that he wrote when he was 15 and another that he wrote for a friend’s wedding.

“It is stressful, you might become nervous, but somehow you’ve got to find a way to relax. If you don’t, you’re not going to have the dexterity. You’re going to stumble,” Goggans said.

As he steps down from Georgetown County Council after two terms, Goggans said he sees a similarity between that role and his music.

“They are comparable in several ways,” he said. After contentious council meetings, “I was asked more than once, ‘You didn’t seem fazed. How did you maintain your composure?’  First of all, you go in prepared. Secondly, once the preparation is done, you can relax and have confidence.”

Goggans was elected in 2014 as a protest candidate. In his first run for public office, he defeated the one-term incumbent, Bob Anderson, with 62 percent of the vote in the GOP primary in District 6, galvanizing opposition to the removal of the two-way left-turn lane on Highway 17 in the Pawleys Island business district.

Eight years later, it has been Anderson – elected in District 2 – who has drawn praise for voting against a series of multi-family developments. Goggans, who cited the benefits of his background in architecture and community planning in running for council, has been singled out for protests from people opposing those projects.

“I’ve got pretty thick skin,” Goggans said in an interview after his final council meeting, but he added, “it’s certainly not fun.”

While public opinion has changed, Goggans said “my ideas on Highway 17 and land use haven’t changed.”

Mixed-use development, a “town center” for the Pawleys mainland and “walkable communities” were goals he identified in an interview before the 2014 election. And, he said at the time, “we need to step back and provide a vision for what our community is and create a plan for that with public input.”

Among his achievements, Goggans lists the county’s allocation of funds for a land-use study of the Highway 17 corridor on Waccamaw Neck that was done in conjunction with an update to a 2003 traffic study by the Grand Strand Area Transportation Study. It was the 2003 study that called for restricting the median through Pawleys Island.

He called the companion land-use study “an extremely valuable document.”

“You can’t design a highway without understanding the land use,” said Goggans.

Building more compact developments where people can live and work would reduce traffic, he said. Opponents have likened that to the Market Common development in Myrtle Beach. Goggans said his idea is more like the Mingo development in Willbrook.

“A little more of that would be great,” he said.

Goggans also pushed for expansion of the Bike the Neck system of paths. The final phase that will create a route from the South Causeway at Pawleys Island to the Horry County line at Murrells Inlet was funded this fall. Links along Petigru Drive and Martin Luther King Road are part of a bike path master plan Goggans championed.

But he said the pace of progress was frustrating. That’s part of the nature of government as well as the need for council members to build consensus for their ideas, Goggans said.

He was still able to get two updates to the tree ordinance, expanding restrictions to residential developments and adding to the list of protected species. The ordinance still needs work, Goggans said, and the county needs more robust landscape requirements for new development.

Goggans also pushed for restrictions on billboards. “We have effectively prevented any more from coming in,” he said.

He thinks the design rules for commercial buildings in the Highway 17 corridor are due for an update.

“Some people might be surprised to hear me say this, but even though we have a lot of open space, we need to enhance that,” Goggans added.

The issues that council members from the Waccamaw Neck deal with most often are land use and infrastructure. The criticism he has drawn over recent votes comes down to a disagreement over the law, he said.

Two lawsuits filed by citizens groups this year say the county failed to follow its comprehensive plan in making land-use decisions. Goggans said he voted to uphold the zoning ordinance, which is adopted based on the comprehensive plan.

“I don’t consider I have a choice,” he said.

He doesn’t see density as the issue, anyway. What the Waccamaw Neck needs to focus on is the quality of the community. That’s also important to the entire county, which relies  on this area’s tax base, Goggans said.

He leaves office feeling that he has helped improve that quality.

“I don’t regret any of it,” Goggans said. “I’m proud of the accomplishments.”