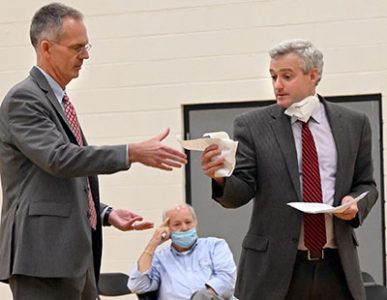 Butch Bowers, left, gets tape of a vote audit from Michael Burchstead as Ron Charlton looks on.

Bob Anderson received the last 11 votes in the Republican Party primary for County Council 2, all cast by the local GOP executive committee. Added to the 22-vote margin he garnered at the polls, Anderson is set to assume the council seat Ron Charlton has held since 1996.

The committee voted unanimously last week to uphold the result of the June 9 primary in the face of a protest filed by Charlton.

Charlton said this week he plans to continue to contest the result, but he did not file an appeal of the local party’s decision with the state GOP executive committee, the next step outlined in state law.

“There’s more going to come of this thing,” Charlton said, adding that his attorneys are still at work, but declining to say what they are working on.

Charlton’s protest as based on voters who said they received the wrong ballot in an election held in the midst of the coronavirus pandemic. Some veteran poll workers did work on primary day. Replacements received training online. Several precincts in the county were combined because polling places were not open to the public.

“It’s not about me winning or losing,” Charlton said. “I hate to see an election like this.”

Anderson agreed there were problems at the polls, but said they affected both campaigns. “Just like a sporting event, it was a level playing field.”

Arguments in last week’s hearing turned on a 2005 state Supreme Court decision stemming from an election challenge in the town of Atlantic Beach.

Charlton’s attorneys, Michael Burchstead and Katie Monoc, tried to show the result was in doubt.

Anderson’s attorney, Butch Bowers, focused on the absence of fraud.

Burchstead and Monoc sought to introduce audits from two of the seven precincts in District 2, Pawleys Island 3 and Pawleys Island 5, that they said raised doubts about the how many qualified voters actually cast ballots in the council race. Since the audits were obtained from the county Board of Voter Registration and Elections, they said they should be admitted into evidence as public records.

Bowers objected. Court rules require that a witness verify the documents. “The chair is empty,” he said, pointing to the witness stand.

“I don’t know how you have a fair election protest without the introduction of evidence about the vote,” Burchstead said.

Bowers said he was willing to stipulate that Anderson won by 22 votes.

Tom Winslow, an attorney elected by the GOP committee to conduct the hearing, ruled the audits could not be admitted.

Burchstead called two voters to testify about problems at the polls. David Eastman said his ballot in Pawleys Island 3 didn’t contain District 2, although he lives in the district. He complained to a poll worker.

“I couldn’t figure out what was going on,” he said. “I was really upset by the way it was just cavalierly dismissed by the poll worker.”

George Lyles testified that he got the wrong ballot in the Winyah Bay precinct. He said the poll workers seemed nervous.

“They asked me Republican or Democratic. I told them the Democratic primary. I went to vote,” Lyles said. His apparent slip went unnoticed in the gym at the Howard School where the hearing was held.

He later said he went to the polls to vote in the Republican primary and was surprised to get a Democratic ballot. “I’ve been cheated out of my vote,” he said.

Bowers offered no defense. “Given that the petitioner did not make a case worthy of overturning this election, we rest,” he said.

In his closing argument, Bowers emphasized that Burchstead, along with both witnesses, said there was no fraud or misconduct. “What they’ve actually done is confirm our position,” he said.

“We’ve been here trying to get our voice heard,” Burchstead told the committee. “There’s doubt whether the District 2 election would have been the same if all the voters had gotten their ballots.”

Neither Burchstead nor Monoc could be reached this week for comments on what Charlton can do next.

Bowers said he learned from Burchstead the day after the hearing that there would be no appeal to the state GOP.  If there is a next step for Charlton, “I don’t know what that would be,” he said.