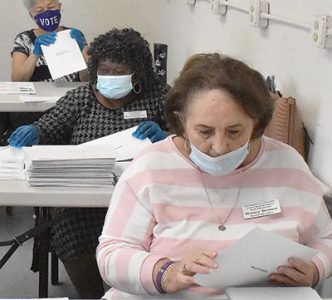 Votes cast by 246 people in Georgetown County in the Nov. 3 election did not count, most of them due to confusion over the requirement for mail-in absentee ballots to have a witness signature.

All of the issues occurred with either absentee or provisional ballots according to a report submitted to the county’s Board of Voter Registration and Elections, which met to certify the results last week.

The majority of the votes – 192 – came from absentee ballots submitted without the mandatory witness signature.

The Democratic National Committee was initially successful with a lawsuit in Federal District Court to suspend the witness requirement this year because of the COVID-19 pandemic, but the U.S. Supreme Court overturned that ruling on Oct. 5 and set Oct. 7 as the last day counties could accept ballots without a witness signature.

Before the high court ruled, the county elections office had been sending out notices with absentee ballots saying no signature was required, according to poll workers.

There were 10 absentee ballots dropped off after the 7 p.m. deadline on election day, and one mailed in without any voter information. They were not counted, either.

Provisional ballots cast by 43 people were not counted because the person either voted at the wrong precinct or was registered in another county.

A provisional ballot is a paper ballot filled out by a voter whose eligibility cannot be proven at the polls on election day.

One provisional ballot was not counted because the voter did not have proper identification with them at the precinct. The voter was told to bring an ID to the elections office before the canvassing meeting in order to have the ballot counted.

The state recently switched to a computerized system that connects scanners at the precincts with the elections office via cell phone.

“Some locations did not have a lot of cell phone service,” said Kristie Richardson, the county’s director of Voter Registration and Elections.

The county received the new scanners only about three weeks before the election.

“Obviously with something like that you’re going to have misunderstandings,” said Billy Altman, acting chairman of the elections board.

The provisional ballots of 96 residents were approved at the canvassing meeting.

Thirty-nine residents voted by provisional ballot because they requested an absentee ballot but said they never received it.

“It never came back and it was never logged in,” Altman said. “They had to vote provisional because the system said they had gotten an absentee ballot.”

Another four residents received an absentee ballot but changed their mind and showed up at a precinct and were given a provisional ballot.

Fourteen residents had moved since the last time they voted and had not changed their address. They used a provisional ballot.

Six ballots at an Andrews precinct couldn’t be scanned so the residents used a provisional ballot.

After adding in all the provisional ballots, the board certified the final election results.

Statewide the turnout was 72 percent.

One race on the ballot that had no candidates, a seat on the Soil and Water District Commission, garnered 2,659 write-in votes.

Election officials had to inspect the ballots to figure out who had the most votes.

Josh Baxley was declared the winner with 661 votes.

Altman said there were still more than 1,000 votes to sort through, but he was confident that no one person would end up with more votes than Baxley.

“Most of them are going to be one or two,” Altman added.

The election board also ordered a recount in the School Board District 4 race between Sandra Johnson and Ramona Staggers-McCullough.

Johnson, the incumbent, won with 1,168 votes to 1,149 for Staggers-McCullough. There were also 21 write-in votes in the nonpartisan election.

The recount confirmed the totals from election night.