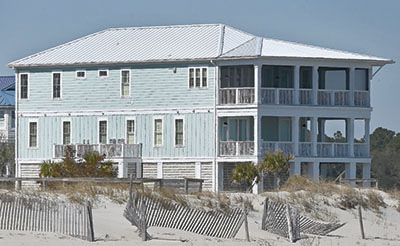 New rules would reduce the area allowed on the second floor of homes.

As the town of Pawleys Island works to devise a set of design standards for new homes, some property owners have submitted house plans to get approval before the rules change.

“They are all designs that would not be allowed if the guidance you have put together was in place,” Administrator Ryan Fabbri told the Planning Commission last week. “They’re trying to get ahead of an ARB.”

There are three new homes planned in the Bird’s Nest section on the south end and three on the north end, he said.

The town started work over the summer to find ways to ensure that new houses have the “Pawleys look,” based on homes first built in the 19th century with wide porches and pitched roofs.

The Planning Commission sent the first draft of a design code to Town Council in December. The council agreed at a workshop to let the commission move forward, but stopped short of approving the proposed rules.

“If we don’t get going, we will be talking about it forever. We have to get something from Town Council about whether they’re with us,” commission member Buddy Keller said.

Mayor Brian Henry said this week he is optimistic the town is making progress.

The proposed rules for new construction and additions require:

• A second floor that has no more than 80 percent of the heated square footage of the first floor;

• Porches that cover at least 50 percent of the first floor perimeter;

• Porches on the second floor that are no more than 20 percent of the area of the first floor porches;

• No “slab-sided, boxy exterior walls” on any side;

• No vinyl, aluminum or synthetic stucco.

The council this week agreed to four of the six points, but said they would like to have a provision that structures destroyed by fire or storms can rebuild to their previous design, even if that doesn’t comply with the new standards.

“The last thing we want to do is tell people what they can’t do,” Henry said. “At the same time, we don’t want people building big boxes.”

Council Member Rocky Holliday said he would like to see how the rules would apply to the small lots on the north and south ends of the island.

“What impact does it have, particularly on somebody trying to deal with a really, really small lot,” he said.

There could be unintended consequences, Holliday said.

With a hurricane, “the unintended becomes inevitable if you have to rebuild your house,” Council Member Guerry Green said.

He proposed allowing owners to rebuild houses destroyed by storms.

John Hildreth, who chairs the Planning Commission, said that wouldn’t be a concern. “What we are really concerned about is new construction,” he told the council.

“My concern is that we keep pushing this down the road,” Henry said.

Holliday said the town can adopt the four guidelines the council agrees on and amend the ordinance later, if necessary.

That would let the town see how the rules work, Henry said.

“We want to be fair,” he said. “We’re also trying to make a positive step forward.”

Henry set a goal of bringing an ordinance up for first reading in April or May. It would require two readings and a public hearing before taking effect.

In addition to the design rules, the ordinance will also have to specify how those rules will be enforced.

“This would fundamentally change everything we’ve been doing,” Fabbri told the commission last week.

The town currently contracts with Georgetown County for plan review, permitting and building inspections. Fabbri has recommended the town take those functions in-house and contract with a private firm for the review and inspections to give the town greater oversight. The commission has endorsed that concept twice, but the council has balked.

“That’s going to be a tough nut to crack,” Keller said.

The commission has proposed that new house plans be reviewed by David Graham, an architect who has helped draft the design standards. He would work under contract.

Whether the commission would serve as an architectural review board to hear appeals of Graham’s decisions or whether a separate board would be created has not been decided.

That is the sort of detail that needs to be specified in the ordinance, Fabbri said.