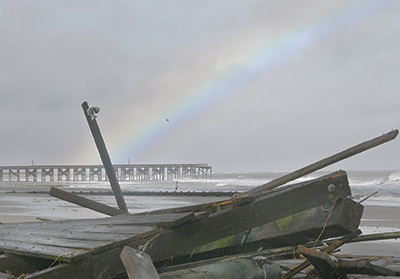 A rainbow appears behind the damaged pier after Ian’s passage. Debris from the pier extended the length of the island.

After hours of standing in the breaking surf, the end of Pawleys Pier settled with a shrug into the waves. Like a tired swimmer, it floated away. It was just after 1 p.m.

The tattered American flag still snapped above the gazebo that had shaded generations of anglers.

Howard Bond captured the scene on video. He was standing in the stairwell outside a friend’s condo at Pawleys Pier Village as Hurricane Ian struck last week.

“I just happened to look up,” he said. “The waves were cresting against the bottom of the pier. It was getting hammered.”

Free of its pilings, the deck followed the contour of the ocean, “almost like a Mexican wave,” Bond said.

The 820-foot pier is now half its original length, said Ted Levering, the president of the homeowners association at Pawleys Pier Village.

“We’re all terribly sad,” he said. “To look out and see half a pier, it’s very depressing.”

As property owners clean up after the Category 1 storm that made landfall over North Island at the southern tip of the Waccamaw Neck, the pier will stand as a reminder of the storm surge that not only battered the beachfront, but filled the creeks and flooded homes from DeBordieu to Garden City.

The Pawleys Pier Village property owners are now at work on plans to rebuild. The structure was insured for $5.5 million. An insurance adjuster was scheduled to inspect it today.

The damaged pier provided the backdrop for a visit by Gov. Henry McMaster the day after the storm.

Fran Oxner, whose family has owned a house south of the pier for generations, looked over the wreckage from Ian on Friday afternoon with a sense of déja vu.

The broken pilings, once 60 feet long, had taken out nearby walkways. After Hugo, they had destroyed houses, she recalled.

Eddie Wilder had watched the surf pound the pier through the midday high tide. He estimated the waves were over 20 feet high. They broke over the end of the pier, he said.

When his wife, Renee, told him that a dock was floating past their house, Wilder realized it was actually the pier.

Bond watched until the portion with the gazebo and flag pole capsized. He has a house on the southern tip of the island.

“There were big sections floating in front of our house Sunday,” he said.

Pilings washed up south of the public parking lot. Other sections remain in the surf zone. The town of Pawleys Island will have to remove the storm debris  the beach, said Mayor Brian Henry. It’s unclear who is responsible from removing debris from the ocean, he said.

The Pawleys Pier Village association will have the remaining structure evaluated for safety, Levering said. It may remove some damaged wood from the end to prevent further damage from winter storms.

The evaluation will determine if the entire pier needs to be rebuilt, he added.

Since the pier was rebuilt in 1990, pilings and timbers have been replaced periodically. Cape Romain Contractors, which built the pier, has already been out to talk with the association about their options.

“We want the pier back. That’s the main thing,” Levering said.