Owners will alter rezoning request to include density swap 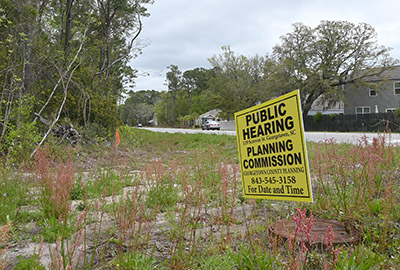 A request to rezone property on Petigru Drive for a residential development will be up for a deferral so the owners can prepare a proposal to reduce the density on a nearby tract.

“Our mistake was not to send both those over at the same time,” said Guerry Green, a partner in Old Kings Highway LLC.

A hearing on a request to create a “flexible design district” on 8.8 acres that would allow construction of 26 houses is scheduled today before the Georgetown County Planning Commission. The property is currently zoned “residential half-acre,” which would allow 17 lots.

Area residents, the Pawleys Island Civic Club and the citizens group Keep It Green oppose the change, saying the request doesn’t show any of the benefits of affordable housing, environmental protection or useable open space that are required by the zoning ordinance to justify an increase of density in a flex district.

“They need to show strong evidence of an environmental benefit or open space,” said Cindy Person, chief counsel for Keep It Green Advocacy, who represents the opponents.

She and Walter Wilkinson, a member of the Keep It Green board, met this week with Green, who said afterward that he and his partner, David Gundling, will ask the commission to defer the issue.

The partners own two tracts on Petigru Drive. The other, 6.8 acres, is part of the River Club “planned development” zoning district even though it is outside the gates of the community.  The zoning dates to the 1980s and specifies the number of units that can be built.

Green said there are about 70 units remaining. He and Gundling propose to shift nine units from the smaller tract to the larger tract. Development of the smaller tract would be limited to no more than 12 units, and the balance would be protected by a conservation easement, Green said.

“It’s better for us to defer it and come back with a new plan,” he said.

The smaller tract was zoned for up to four units an acre before it was included in the River Club planned development, according to county zoning maps.

“It was never our intention to use all those 70 units,” Green added.

Documents submitted to the county planning office show that the larger tract is due to be sold to a division of Toll Brothers, a national homebuilder.

Person said her clients are pleased with the concept of swapping density.

“We’re going to collaborate and work together with them to find something that’s acceptable that doesn’t increase net density,” Person said. “That’s really what we’re looking for.”

Keep It Green sued Georgetown County earlier this year to overturn the rezoning of 14.8 acres off Highway 17 that raised the number of potential residential lots that could be developed. That case is pending in Circuit Court.

Any collaboration could go beyond the property on Petigru Drive, Green said.

Placing a conservation easement on the smaller tract would protect it from future development, but there are few organizations willing to accept those easements on small parcels. Green and the late Jimmy Chandler, founder of the S.C. Environmental Law Project, created the Winyah Conservancy many years ago for that purpose, Green said.

“We want to revive that,” Green said

Also on the commission’s agenda is a request to rezone property on Pawleys Creek from “residential one-acre” to “residential 10,000-square-feet.”

It also has opposition from the neighbors and Keep It Green.

Micheaux Resource Management bought the property thinking that a portion was already zoned R-10, according to the application.

The county planning office said it approved a subdivision of the property in 2020 based on GIS maps that showed the split zoning. The staff later learned that the GIS maps differed from the official zoning map, which shows the one-acre zoning applies to the entire parcel.

“I don’t believe that is justification for a rezoning,” said Person, who also represents the opponents in this case.

The zoning change would allow up to six dwellings on the property, which now has two due to erroneous subdivision. That increase from low to medium density is too much for a parcel that borders the salt marsh, Person said.

The commission meets at 5:30 p.m. in the old county courthouse on Screven and Prince streets in Georgetown.