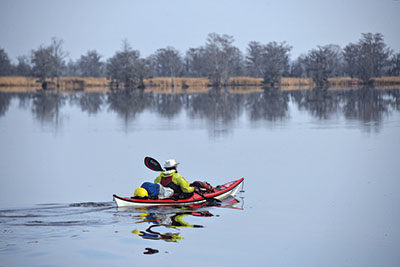 Steve Chard heads north on the Waccamaw River on the final leg of his Great Loop.

Steve Chard’s friends dared him to wear the hat. They are policemen in the county of Dorset in the southwest of England so it was hard to refuse. But the hat wasn’t a Bobby’s familiar headgear. It was from a bachelor’s party, bright pink and iridescent.

After almost 4,000 miles on the water from Nova Scotia, across Canada and south through the U.S., the broad-brimmed hat was still on Chard’s head as he pulled up to a dock at Hagley this week. It has faded almost to white while his face and hands have turned brown under the sun of nearly 200 days on the water.

The Englishman, a veteran of the Royal Navy and a retired medical technician, is on the second leg of a journey he began last June. “I decided I wanted to do something significant for my 60th birthday,” he said. He had been a runner all his life until a hamstring injury brought that to an end. He took up cycling. He tried open-water swimming. “Only once,” Chard said. “Once was enough for that.”

He wanted to do something different, so he turned to kayaking. “I used to kayak as a Sea Scout,” Chard said.

All of his athletic endeavors were tied to fundraising. On this trip, he is raising money for nine charities. Those in the U.S. are Disabled American Veterans, the American Kidney Fund and the Submarine Force Museum in Groton, Conn.

His initial plan was to paddle in a four-day, 120-mile event through England that ended up in front of the Houses of Parliament. “Somebody gave me a book entitled ‘Honey, Let’s Get a Boat,’ which is by Ron and Eva Stob, who actually later went on to found the American Great Loop Cruisers Association. I read that.

I thought, I could do the same in a kayak.”

The Great Loop is a series of natural and man-made waterways that make it possible to circumnavigate the eastern United States. Part of the route follows the Atlantic Intracoastal Waterway, which runs along the Waccamaw River. Chard added to the journey by starting in Halifax, Nova Scotia, and included the St. Lawrence River.

Chard’s friends dared him to wear the hat, a relic of a bachelor’s party that was once pink.

When he turned 60 on Sept. 20, 2017, he was in the middle of a year’s training for the trip. He bought a 17-foot, 8-inch expedition kayak from Nigel Dennis Kayaks, a company in Wales, for the task. “It’s probably the best expedition sea kayak ever designed,” Chard said.

One of his mentors was Peter Bray, who paddled across the Atlantic Ocean from Newfoundland to Ireland in 2001. The key goal of Chard’s training was to build up endurance. He also used the time to build up a Facebook network of friends and fellow kayakers along his route.

The starting point was selected because one of Chard’s four brothers lives in Halifax. Chard arrived in Canada a month before the journey began to pick up an identical kayak from an outfitter in New Brunswick. The cost of two kayaks was less than that of one that could have been taken apart to bring on the flight from England, he said.

“When I left Halifax on the very first day, I didn’t even know where I was staying the first night,” Chard said. “I paddled up to a row of cottages. I went ashore. I knocked on the door, told them who I was and what I was doing and said, ‘Please, could I camp on your lawn?’”

He packs a tent and a sleeping bag, but “I’ve managed to stay with people more than I’ve had to camp,” Chard said. “I’ve had to pay for a hotel four times because of horrendous thunderstorms.”

“I was told before I started back in April-May last year, Steve, be careful. You will find people who will shoot first and ask questions later,” Chard said. “I found a guy like that.”

It was in Jacksonville, Fla.

Chard doesn’t ask for accommodation. He asks people to help him find a place to camp. He landed in front of a house in a neighborhood in Jacksonville and was met by a homeowner and his three Dobermans. “He started screaming at me, insanely screaming at me,” Chard said. He tried to explain. The man pulled a knife and pointed at Chard’s throat.

“He told me if I’d arrived an hour later, which would have been darkness, he’d have shot me. And I believe him,” Chard said. “I was in shock.”

Chard debated whether to mention the incident in his Facebook posts. He did and was met by an outpouring of support from kayak groups along the East Coast. It only served to underscore the generosity of the many people who had offered him a spare bed, a sofa, a camper or any other place that didn’t require him to pitch his tent. “It’s restored my faith in human nature,” Chard said of the trip. “The hospitality’s been fantastic.”

The weather has been his biggest challenge. He missed 27 days of paddling because of storms last summer. That caused him to miss sections of the Great Lakes. Instead, hosts helped him make some long portages to keep on track.  “I’m not so stupid as to think I could paddle every single mile. If I was 30 years younger, I would be insisting upon it,” Chard said. “I’m obviously paddling 90 percent of those 6,000 miles. More than most.”

If he could double back, he would paddle the Georgian Bay in Lake Huron to Mackinac Island, where it meets Lake Michigan, “a bit I had to miss out,” Chard said.

He also took two months off starting at the end of November. His kayak needed repair and Chard needed to exit and return to the U.S. to meet the conditions of his visa. He is now in what he calls the second leg of his Great Loop. He plans to be back in Halifax by the end of August.

“I’ve actually had a guy contact me who said he’s planning his loop and I’m one of the things that’s inspired him,” Chard said. “I feel very humble that he thinks I’m an inspiration.”

THE ONLY THING that holds Steve Chard back as he completes his 6,000 mile kayak journey around the Great Loop is a headwind over 20 knots. His fiberglass sea kayak is designed to cut through anything else.

It’s packed so tight that when a leak appeared after he cut the hull by dragging it up a ramp, it took two days for the water to make itself known. He has camping and cooking gear, a dry suit, a couple of changes of clothes and two gallons of water. There is also an iPad Mini and a solar charger, a storage battery and a hand-cranked radio.

The only modification he made to the kayak was to remove the backrest so he could stow more gear behind the seat.

“I do have about two weeks’ supply of dehydrated food. I’ve also got a bag of pasta, a bag of rice, a bag of oatmeal, a few tins of ham, sardines,” Chard said.

He weighed 180 pounds when he arrived in Nova Scotia from England last spring to start the trip. “I lost 46 pounds in the first two months,” Chard said. “They put me on a protein supplement.”

While Chard has rolled the kayak in training and wears a spray skirt, stability isn’t an issue, he said. Nevertheless, he wears a tow line around his waist that would keep him connected to the boat in a mishap. “The main safety thing was to make myself safe,” he said.

He also has the required safety gear –whistle, white light, flares and life jacket – along with a marine VHF radio and a throw line. A bilge pump is strapped to the deck. He also has a helmet for insurance purposes. Chard said he may wear it when he reaches the rocky New England coast.

He has only lost one piece of equipment: a small bison given to him as a mascot by a family member in Canada. “It went overboard on the Illinois River,” Chard said. “A bad day.”

He keeps up a steady pace, perhaps a little faster than some. He has a Celtic-brand carbon fiber paddle. The paddle and the kayak were both designed by Nigel Dennis, who makes equipment in Wales. The paddle has a “crank” rather than a straight shaft. “It helps with repetitive strain,” Chard said. It’s also adjustable and designed for left-handers.

A spare paddle is also by Celtic, but it is a heavier, less expensive model.

“I’ve got gloves, but I very, very rarely wear them. About two days in the whole trip,” he said. “One of my mentors at home never wears gloves. I picked it up from him. You can feel the paddle better.”

Chard paddles 20 to 30 miles a day. The effort also makes use of his legs and feet, which are positioned on pegs in the boat. “You actually push with your foot as the blade’s coming back,” he said. Still, to avoid blood clots from sitting for long periods, he takes regular breaks to stretch. Aside from a cold that laid him up for five days, Chard, 61, said he is as fit as he’s ever been.

“You’ve got to get into a rhythm and stay in that rhythm. It’s all about muscle memory,” he said.

The hardest part of a long journey is mental, Chard said. “Just occasionally, ‘Do I want to get up and paddle this morning?’ Nothing too difficult. It’s obviously my personality and disposition. Having a Royal Navy career background, I’m disciplined, I suppose.”