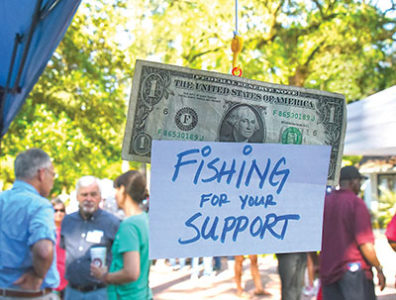 Dozens of nonprofits that serve Georgetown County residents are hoping for an infusion of donations on Tuesday during the third annual Palmetto Giving Day.

Teach My People in Pawleys Island has a goal of raising $100,000, according to executive director Eric Spatz. The nonprofit, which is an after-school and summer program for students in need, already has $33,000 in matches pledged.

“It would be incredible,” Spatz said. “It would help fund our after-school academic program.”

It takes $440,000 a year to run Teach My People’s program, and all of the money comes from the community. The nonprofit gets no federal funding.

“We’re truly a grassroots community organization,” Spatz said, adding that 89 cents of every dollar received is spent on students.

This is the second year that Empower Angels of Pawleys Island has participated in Palmetto Giving Day. The goal is $20,000, said Gina Clapham who founded the service-based mentoring program for school-age girls.

“We were happy,” Clapham said. “We literally found out about it at the last minute.”

Clapham said donations help her girls do more volunteer work at senior centers, including providing gifts and arts and crafts.

“We’ve been blessed [but] eventually our goal is to get into our own facility,” Clapham said.

“We hope to make an even bigger jump,” said Ashley Nelson, communications and programs officer for the foundation. Tuesday’s goal is $1.5 million.

State Rep. Lee Hewitt will present a resolution from the House of Representatives to the Bunnelle Foundation marking May 7 as Palmetto Giving Day, and recognizing the foundation’s role.

Forty-nine nonprofits will take part in the event. Nelson said the requirements were that the organization serve Georgetown County, have an active social media presence, have received at least three Bunnelle grants since 2014 and have secured a minimum $1,000 commitment to match donations on Palmetto Giving Day.

The foundation will match up to $5,000 in donations during the event for each nonprofit.

The only Palmetto Giving Day donations that will be matched are those that are made online at palmettogivingday.org between 12:01 a.m. and 11:59 p.m. on Tuesday. A minimum donation of $25 is required.

To see a list of all the nonprofits involved in Palmetto Giving Day is also at palmettogivingday.org.

The nonprofits will gather on Front Street in Georgetown on Tuesday from 3 to 7 p.m.