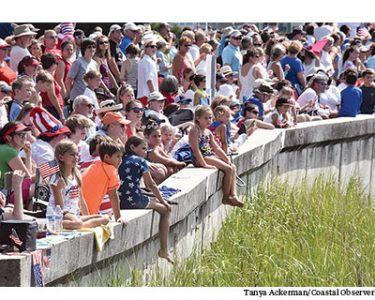 Spectators pack the seawall behind Belin Methodist Church for the parade.

The theme is “Independence Day the Inlet Way.” There is a logo ready to be printed on posters and T-shirts.

But the fate of the Murrells Inlet Fourth of July Boat Parade remains uncertain.

“I have applied to DNR with my permit. At this time, they are not issuing permits because of the governor’s order,” said Lee Hewitt, an organizer of the parade since its founding in 1983. “I’ve got everything ready to go.”

Hewitt always waits until the Blessing of the Inlet to announce the parade theme. The blessing was held online Satuday rather than at Belin Memorial United Methodist Church, another casualty of the governor’s ban on public gatherings designed to slow the spread of the coronavirus.

The boat parade from Garden City Point through the main channel to the Murrells Inlet waterfront draws hundreds of decorated boats and thousands of spectators, many of whom line the Marshwalk and the creekfront behind Belin.

“It’s easy to regulate the boats,” Hewitt, a member of the state House, said as he headed into a meeting of the AccelerateSC committee that is exploring ways to reopen businesses. “You’ve seen how packed the Marshwalk is. That is not what’s being encouraged right now.”

The Marshwalk itself is currently closed by Georgetown County until May 15.

A month ago, Hewitt was certain the parade would go forward and hopeful that the Blessing of the Inlet could be held. His biggest concern was that the tides on July 4 would require starting the parade at 5:30 p.m., two hours before the high tide. An earlier start isn’t possible because of shallow water in the creeks.

“I don’t like afternoon Fourth of July parades because of thunderstorms,” Hewitt said in April. “That’s just scary.”

Now there is the possibility of a Fourth without a parade for only the second time in 37 years. The parade in 2016 was moved to July 2 because of the tides.

“I would love to have it for the spirit, just to get everybody out,” he said. “The question is, how late can I wait to make that decision.”

The Boy Scout troop sponsored by Belin sells the T-shirts as a fundraiser. Hewitt is talking with the leaders to make sure they are comfortable with that this year.

He is also talking with the restaurants along the Marshwalk, where the state this week allowed service to resume for customers seated outdoors. Hewitt isn’t sure they will be comfortable having the large crowds that come with the parade.

The same discussion is taking place at AccelerateSC, Hewitt said.

Employers need to feel comfortable with the guidelines on distancing and protective equipment before they will bring employees back to work. Employees have to feel they will be protected.

“Then you have to have the customers comfortable with going into these businesses,” Hewitt said.

For the Murrells Inlet parade, “the bottom line is to celebrate America,” Hewitt said. “What a great way to do it.”