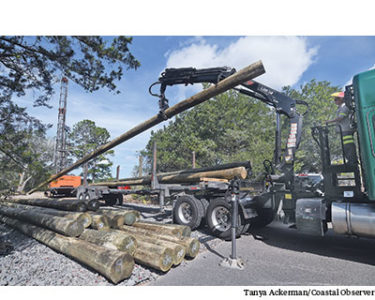 Pilings are unloaded at the site of the new nature center.

A gantry peeks above the oaks, cedars and pines that border the salt marsh. A forest of pilings is rising as Huntington Beach State Park rebuilds the nature center that was destroyed by a lightning fire three years ago.

“The nature center that we had previously worked great. It served the park perfectly. The new building will be very similar,” Brenda Magers, the park manager said. “We have updated all the exhibits for the most up-to-date scientific knowledge.”

The center is due to open in the spring.

Lightning struck the old facility around 2:30 a.m. on July 20, 2016. Firefighters arrived to find it engulfed in flames. Dozens of animals in the exhibits died.

The opening of the $880,000 nature center in 2002 marked a change in the mission of the park from camping and beach access to environmental education, officials said at the time. The state Department of Parks, Recreation and Tourism received about $600,000 from insurance. Additional funds were approved by the legislature in 2017 and PRT said it would reopen the nature center in May 2018.

But Paul McCormack, who became the state parks director this month, said damage to parks at Hunting Island and Edisto Beach from Hurricanes Matthew and Irma became the focus of the department’s engineering section. The Huntington Beach facility went out to bid last fall after Hurricane Florence.

Staff at the park gets questions about the nature center daily, she said. Now they have an answer.

The facility will have 4,500 square feet of  space for exhibits about coastal habitats from ocean to salt marsh, a classroom and a workroom. In the middle will be a touch tank. “That was very popular in the past,” Magers said.

It will have a stingray, horseshoe crabs, hermit crabs and sea stars. “We will have baby alligators again. We have already secured permits for that,” said Mike Walker, the park’s interpretive ranger who was in charge of the nature center.

There will also be aquariums and a birding area. The Friends of Huntington Beach State Park have raised $120,000 toward the $187,000 cost of the exhibits, Magers said. The total cost of the facility is $1.2 million.

The nature center drew about 40,000 visitors a year. The total attendance at Huntington Beach State Park for the fiscal year that ended June 30 was 875,000. “It’s up dramatically,” Magers said.

Huntington Beach ranks second among the state’s 47 parks in revenue, McCormack said. He added that it serves both visitors and area residents. “It’s a great jumping off point to teach people about the environment,” he said.

Three years without a nature center didn’t stop programs at the park. Many just moved outdoors. “It was a reminder to reconnect with the resources that are here,” Magers said.

But the center remains an important feature of the park.

“It’s a memory-maker. People remember coming here with their children, watching their child hold a starfish,” Magers said. “There’s a lot of emotional connection to the building.”