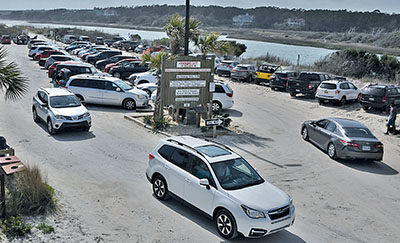 Charging a parking fee at the south end will lead to more roadside parking elsewhere on the island, the former mayor says.

A proposal to help fund beach renourishment by charging a parking fee at Pawleys Island beach accesses narrowly survived a vote to kill the idea. The town’s ad hoc finance committee this week deadlocked on a motion to drop the proposed fee from its recommendation to Town Council.

The town is looking for ways to raise about $800,000 a year to fund ongoing renourishment after a project that is expected to start this fall puts up to 1.1 million cubic yards of offshore sand on about 2 miles of beach starting at the south end. The Corps of Engineers will fund 65 percent of the project on the narrow south end. The town will fund the northern portion with funds accumulated from a local tax on short-term rentals and with a state grant. The town will be required to pay half the cost of future renourishments on the south end.

The committee agreed to focus only on long-term beach funding rather than funding town operating costs because the Town Council has already started cutting some costs to balance its operating budget.

Pawleys Island has no municipal property tax. Under current state law, it needs approval of the General Assembly to implement one. A bill pending in the legislature would allow Pawleys Island, and other towns without a property tax, to adopt a tax rate equal to a third of general fund expenses. For Pawleys Island that would work out to $145,000 to $280,000, depending on how the general fund is defined.

The finance committee had ruled out several revenue-raising options because the money wasn’t enough to justify the administrative expense. But if the property tax bill passes, “we’re going to need to go back and revisit the nickel and dime numbers,” committee member Glenn Kornahrens said.

But Josh Ricker, who chairs the committee, pointed out that the parking fee was still an option. He estimates that it could raise $175,000 a year using 10 kiosks that would dispense tickets for $2 an hour parking.

Committee member Harry Oxner said it was premature to talk about the fee without knowing whether the state, which owns the road rights-of-way, and the county, which owns the south end parking lot, would approve. “Why are we going to sit here and discuss it for hours?” he asked.

Town Council Members Guerry Green and Sarah Zimmerman, who serve on the 10-member committee, were on opposite sides of the 4-4 vote.

“When I park my boat over at Hagley, I don’t have people say, ‘this is my river,’” Green said.

“What if it was only the south end?” Zimmerman asked, referring to the county parking lot.

Former Mayor Bill Otis, a non-voting member of the committee, said that would lead more people to look for roadside parking, probably at the island’s north end. “You’re pushing everybody financially to move up to the north end and park in front of somebody’s house, and that’s not fair,” he said.

The parking fee isn’t just a way to raise money, Ricker said. “The beach has a cost and that cost has to be born by the people who use the beach,” he said. “Our beach is broken.”

Committee member Leda Hall added that people pay to use the national parks. “Those are national treasures that belong to all of us,” she said.

Oxner moved to table the plan. “I’m against a parking fee,” he said.

Green wanted to vote it up or down. Oxner agreed. They opposed the fee along with Jimmy McCants and Sumter Moore.

Zimmerman said she wasn’t ready to make a decision, so she supported the fee.

“I’m waffling on the parking myself,” Moore said. He also told the committee that one way for the town to get additional funds for beach renourishment is to add more public beach access. The middle of the island isn’t eligible for federal or state funding because it lacks public access.

The town has estimated an access point in the middle of the island would make the town eligible for about $1.5 million in state funding for beach renourishment.

“That’s something that needs to be looked at,” Moore said.

The committee did agree to recommend that Town Council get a legal opinion in the impact of the pending property tax legislation and on the requirements for creating an “improvement district.” State law allows municipalities to create the districts to borrow money for projects that preserve property values. It includes dredging, but doesn’t mention beach renourishment.

If the town does adopt a property tax, it will be limited in the ability to raise taxes to a formula based on the federal Consumer Price Index and population growth. Taxes levied to cover debt service is not restricted by that formula. Otis and Green said the town should get an opinion on whether it could borrow money for a “reserve account.”

“We’re trying to put money in the bank,” Green said, rather than pay off a loan.

The town estimates it will need a reserve of $11 million by 2028 to fund half the cost of the next Corps of Engineers renourishment on the south end.