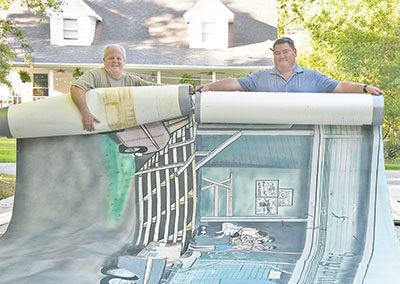 Robbie Buice and Mark Pender building a frame to display the mural at the Pawleys Pavilion Reunion.

Most of the people who attend the Pawleys Pavilion Reunion every year never got a chance to dance at any of the island’s four pavilions, the last of which was destroyed by a fire in 1970.

But this year’s attendees will be able to have their pictures made with a 10-foot by 30-foot mural of the pavilion that stood in the mid-1960s. The image on the mural will probably be familiar to a lot of people since it was taken from an iconic picture postcard taken by the Florence photographer Ernest Ferguson. It was later made into a print.

Craig Stephenson of Custom Signs and Graphics in Kingstree painted the mural for a Kingstree High School reunion in June 1996. After the event the mural was given to Sarah Grayson of Litchfield, who grew up in Kingstree but spent a lot of time on Pawleys Island with her family.

“I grew up in Kingstree. There was nowhere else to go,” said Grayson, who is now 70. “I went [to the pavilion] all my life. I went there to shag.”

Grayson said if a young man took her to Pawleys Island on a date her parents would extend her curfew by one hour to allow for travel time.

Grayson gave the mural to Nick Stines, hoping eventually it might end up in the island’s new Town Hall.

Stines gave it Paul Kenny because Kenny’s wife, Maura, is an artist. The mural was too large for the Kennys to display so they gave it to Robbie Buice, the chairman for the reunion.

“I was trying to convey it to a home that would make good use of it,” Kenny said. “He was terribly excited about the idea of doing something with it.”

Buice and Mark Pender built a frame for the mural and plan to place it by the Nature Park along Pawleys Creek where the pavilion stood that is now a kayak landing. The mural will be in place in time for Saturday’s reunion.

Grayson was pleased that the mural is going to be displayed.

When Habitat officials found out the mural’s history they reached out to Grayson and invited her to be their guest at the reunion.

The first Pawleys Pavilion Reunion was in 1998 and sponsored by the S.C. Environmental Law Project. After a two-year hiatus due to a lack of sponsorship, Habitat for Humanity brought the reunion back in 2011 as a fundraiser.

This year’s event will be Saturday from 6 to 11 p.m. in the Nature Park at the end of the North Causeway. Entertainment will be provided by Gary Lowder and Smokin’ Hot and DJ John Smith.

Advance tickets are $30 for adults ($10 for children 3 to 12) and available at Applewood House of Pancakes, James W. Smith Real Estate, Palmetto Ace, Pawleys Island Supplies and the Habitat ReStore or office in Georgetown.

Adult tickets will be $35 at the door.

There will be parking at Pawleys Island Community Church and a shuttle bus to the Nature Park. No coolers, outside food or pets are allowed.