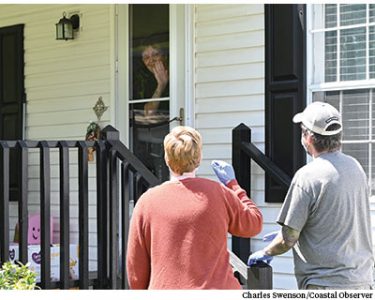 Tamara and Sean Lance make a delivery to a Garden City home.

The yellow Kia Soul rolled slowly along the gravel streets in a Garden City neighborhood. It was stuffed with boxes of food, packs of diapers and water bottles.

After a series of twists and turns, the car pulled up in front of a mobile home. Tamara and Sean Lance put on gloves and face masks and carried an armload of supplies to the front porch. They knocked and backed away.

What started as a desire to help a few people has morphed into a mission for the couple, who until the coronavirus pandemic had worked from their home off the South Causeway at Pawleys Island.

The Lances and their son, Kai, 9, have delivered food to more than 100 people in Georgetown and Horry counties.

“I just wanted to do something on my own,” Tamara said. “I realized there was a much bigger need than I imagined.”

The Lances’ mission started slowly about three weeks ago, but has gained momentum since going viral on Facebook. A Go Fund Me page has already raised more than $7,000.

“Every day I’m in shock,” Tamara said. “People have reached out so much. It has just blown my mind.”

The Lances get people’s names from local churches, nonprofits and crisis groups. People have also reached out to them on Facebook.

“There’s no shortage of people for sure,” Tamara said. “Sometimes we find ourselves with tears in our eyes. It’s just hard to see people in these situations.”

The Lances have even tracked down homeless people living in tents in the woods to deliver food and supplies. One family confided to the Lances that they had not eaten in two days.

Some food is dropped off at their house or at Owens Liquors in Litchfield. Last week, they picked up a box collected for a cancer patient undergoing chemotherapy. It included an Easter basket wrapped in plastic. 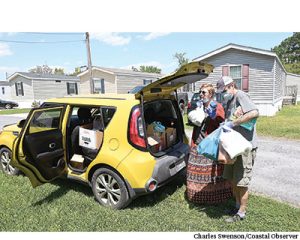 The Lances travel two counties delivering food and other supplies.

“It’s amazing how much this car can hold,” Sean said as he rearranged the cargo.

They wear gloves and masks when handling the items, which are also spread out on tables and chairs in their home for sorting.

The couple buys food in bulk at Sam’s Club in Myrtle Beach or orders it online. There are also daily shopping trips for bread, baby formula and diapers.

Someone gave the Lances a microwave oven to donate to a man battling cancer.

Sean is a field researcher for the Institute for Social Research at the University of Michigan. He said that experience knocking on doors and talking to strangers helped when they started traveling the two counties. Time spent delivering pizzas was also an asset, he added.

“We actually like to drive,” Tamara, an artist and illustrator, said. “We would probably be doing this anyway.”

Now they are driving with a larger purpose. After delivering supplies at the Garden City home, they watched as the front door opened. From behind a storm door, a woman looked out cautiously, then smiled and waved.

The Lances have no idea how long they’ll keep their mission going.

“I think it’s going to get worse and worse for people,” Tamara said. “We’ll just keep going as we’re getting the donations coming in. Hopefully we can get a lot of people through this whole pandemic.”