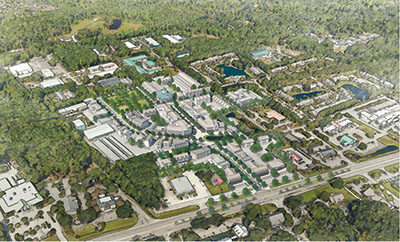 A rendering of a Pawleys Island town center created by Dover Kohl & Partners for a 2018 community forum.

Creating a “downtown district” in the Pawleys Island area is among the recommendations the Georgetown County Planning Commission will consider as it starts work today on an update of the future land-use plan.

A draft proposal of goals and strategies suggests a mix of commercial, professional and residential uses for the district as well as “prioritization of complete street design and implementation.” A “complete street” design is one that considers the needs of a variety of users including vehicles, public transit and pedestrians.

Land use is one of several elements of the county’s comprehensive plan, which state law requires local governments to update every 10 years. The county is behind schedule with its update, which was last done in 2007. It has contracted with Waccamaw Regional Council of Governments to help with the update.

The downtown Pawleys concept was included in public forums held in 2017 and 2018 that were intended as a lead-in to the land-use plan revision.

“This has been thrown out for discussion,” said Tom Britton, planning director at Waccamaw Regional, said.

He stressed that the goals and strategies are only a draft and still have several layers of review and public input before they are adopted. So did Boyd Johnson, the county planning director.

“We didn’t want to go in there with blank paper,” Johnson said.

But Britton said they also want to present ideas that are relevant. “There’s been a lot of discussion about downtown Pawleys,” he said. “From a land-use standpoint, it makes a lot of sense.”

Promoting “efficient and sustainable” land use is the first of 11 goals. Among the strategies to achieve that is a recommendation that the county adopt alternatives to “Euclidean zoning.”

The phrase comes from the title of a 1926 case in which the U.S. Supreme Court upheld the constitutionality of zoning by districts based on use. Alternatives that allow for a mix of uses include planned developments, form-based codes, overlay zones and floating zones.

Under the goal of protecting residential zones, the strategies include allowing commercial and professional uses provided they serve neighborhood needs and are compatible in “scale and form.”

“The common planning technique now is to have a neighborhood grocery store where you can go for bread or milk,” Johnson said. “You cut down on your number of traffic trips.”

It would redefine medium density as three to six units an acre and high density as seven to 20 units.

“You would think density is the same every place. It’s not,” Johnson said. “Our high density has a very low threshold.”

The proposal would limit the very high density to planned developments.

Smart growth is a tradeoff, he said. “You allow for more open space. You preserve space in exchange for creating density in some areas.”

As for downtown Pawleys, “I’ve been saying for a long time we need a town center,” he said.