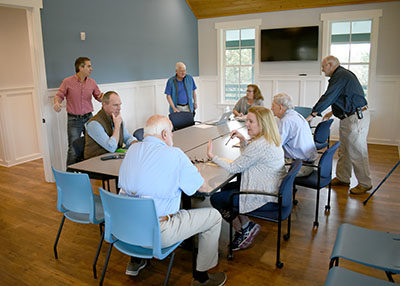 The ad hoc finance committee was the first group to meet in the new Town Hall.

A committee of property owners and town officials is looking for ways to close a projected shortfall in the town’s operating budget and find a source of funds to pay for future beach nourishment projects.

Pawleys Island has no municipal property tax. A presentation to Town Council last month about a business license drew a mixed response, raising concerns that it would add to the cost for people who rent their property while at the same time failing to generate enough revenue.

“The good news is we actually have some cash reserves,” said Josh Ricker, an island resident who chairs the committee formed by the council to consider the town’s financial options.

The town’s operating budget is due to average deficits of about $110,000 a year over the next 10 years, based on projections by Administrator Ryan Fabbri. The town also plans to start a beach nourishment project in the fall with the Army Corps of Engineers. The town has to commit to fund half of future projects and estimates it will need to raise $7 million over the next 10 years for that portion.

“The gap we need to bridge in operations is nickels and dimes compared to what we need for beach renourishment,” said Glenn Kornahrens, an island property owner.

Council Member Guerry Green questioned the need to raise revenue to fund operations. “I don’t hear a lot of people asking for more services,” he said. “We’re not annexing. We’re not adding staff.”

The committee tried to avoid talk of a property tax, but the topic was inevitable. One mill of property tax would raise $31,076, according to figures provided by the Georgetown County Auditor’s Office. To meet the town’s need for the beach project, property tax bills would go up about 13 percent from what owners now pay to the county and school district, former Mayor Bill Otis said

“I want to avoid a tax,” Ricker said. But he also wants the committee to look at all options.

For instance, Ricker suggested the town could raise $250,000 a year with parking permits. Owners would get free permits, but renters as well as day visitors would have to pay for them.

“I’d like to be on that committee,” Betsy Altman, owner of Pawleys Island Realty, said.