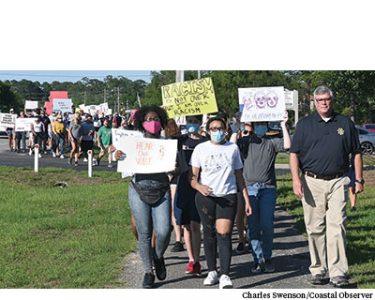 A member of Generation Z is stepping up to inspire people of all ages in the fight against racial injustice.

Eileen Carter, a rising sophomore at Waccamaw High School, led hundreds of people in a protest march alongside Highway 17 in Pawleys Island this week. She has scheduled another protest for Saturday at11 a.m. in Georgetown. Participants will walk from East Bay Park to the old Winyah High School.

“I saw people’s frustration in other cities and on social media in our community, so I just felt that maybe they would need a place to vent their frustrations,” Eileen said. “We’re growing up to be the next leaders and the next presidents and such so I think it’s really important for us to start speaking out now.”

The protest was in response to the death of George Floyd, who died in police custody in Minneapolis last week. An officer held his knee on Floyd’s neck for nearly 9 minutes.

During a video of the incident that has gone viral, Floyd can be heard repeatedly saying “I can’t breathe.”

Marchers chanted slogans such as “no justice, no peace,” “say his name – George Floyd,” and “hands up, don’t shoot.”

Unlike protests in other U.S. cities that have turned violent and have included looting, no problems were reported on Monday.

“This is exactly what I’m hoping for. It is really making me very happy to see all the people from my community, even people I’m not that close to, coming out and supporting,” Eileen said. “I was really thankful that everybody came out. I thought it was a success.”

Sheriff Carter Weaver joined Eileen on Monday for the 6 p.m. march that covered just over a mile on the Bike the Neck path from the Dollar General to the Speedway convenience store and back.

Deputies and state troopers were stationed along the route.

“The biggest message that I want to get out is I think that law enforcement is talking too much and we need to listen, especially executives,” Weaver said. “It’s our turn to shut up and listen. I think that’s important and that’s what I plan to do. When I walk with these young people, I hope I learn something and I know I will.”

Weaver said he joined the march after speaking with Eileen, who he found to be smart and caring.

“You couldn’t help but want to be a part of what she was doing,” Weaver said. “It’s a good cause. We’re here for the right reasons. We’re here for a peaceful protest. We’ve been doing this for 100 years. We’re going to do it for 100 more.”

Eileen recently won an oratory contest hosted by the local Optimist Club. The theme was “imagine a world without boundaries” and Eileen’s speech was about her dream of racial equality. She talked about being afraid to wear a Dorothy costume to school on Halloween when she was in sixth grade. She felt like people wouldn’t like it because Judy Garland was white. In the end, Eileen donned the costume to go trick-or-treating.

“I remember that just hurt my feelings a lot,” Eileen said. “It was talking about how we could all just come together and if there were no racial boundaries in the world things would be more peaceful and people could be themselves.”

Marvin Neal, president of the Georgetown County branch of the NAACP, predicted that Generation Z will change the world.

“This is the only way change is going to come, it’s their time,” Neal said. “What we have done, we just didn’t do it the right way. There’s so much more that needs to be done and we need to listen and look to the eyes of our youth.”

Eileen is active in the NAACP.

“She’s a great person. She’s a great supporter,” Neal said. “She means what she says. She has a voice … that will move people. A voice means everything coming from a youth. When they say ‘you need to hear us,’ we need to hear them.”