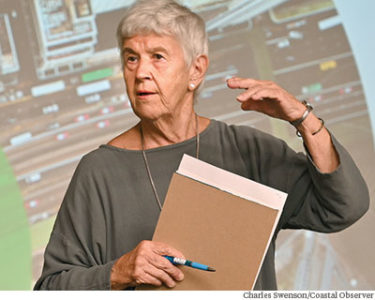 Karen Yaniga started the effort to get the signal system for emergency vehicles two years ago.

A citizens’ effort to give fire and rescue vehicles priority at traffic signals has gathered over 700 signatures on a petition urging Georgetown County Council to adopt a plan that the council rejected last month. “Most people say, ‘Why don’t we have it?’ ” said Karen Yaniga, a leader of the effort.

Yaniga and three other Pawleys Island area residents first pitched the idea of a signal pre-emption system, called Opticom, to the county two years ago. The cost was $650,000 and the budget for the year had already been adopted.

This year, they presented a revised package at the start of the budget process. A 10-year contract at $143,704 annually would cover installation and maintenance of devices on 76 vehicles and 30 traffic signals around the county. The group proposed a $3 annual fee on all parcels to fund the system.

The group, which includes Gary and Pat Gadek and Tom Stickler, have met with fire chiefs, state Department of Transportation officials and staff of Tidelands Health. The system would cover all three fire districts in the county plus Georgetown and Andrews departments, giving vehicles priority at traffic signals and allowing traffic to flow ahead of the emergency vehicles.

The Opticom system boasts a 25 percent reduction in response times, but Jake Kistel, regional sales manager for Transportation Control Systems, said the actual number is closer to 40 percent. In Las Vegas, it was 32 percent even though the city already had a pre-emption system.

“The chief said it was like parting the Red Sea,” Kistel told 40 people who gathered this week at the Waccamaw Library to learn more about the project.

Kistel has worked with local governments and regional planning organizations on Opticom systems, but this is the first time a citizens group has initiated the effort. “This is awesome,” he said. “The community is doing something that will benefit everyone.”

County Council, in an email to Yaniga, said the annual cost was too high in a year that saw the county draw on its reserves to balance the budget. It rejected the idea of a $3 fee as “a slippery slope” that would lead to other requests for fee-based projects.

The council’s response came before county staff proposed a business license fee and a review of other building and permit fees as a way to raise revenue.

The council also questioned the benefit to people in the rural areas, where property owners would pay the same $3 fee as those on the more densely populated Waccamaw Neck.

Yaniga said signatures on the petitions have come from across the county. She noted that 158 businesses have endorsed the plan. The group will continue to gather signatures and urge people to show up at the Aug. 27 council meeting when they are presented.

“We just want to be sure we have people in the chamber to show the amount of concern,” Yaniga said.