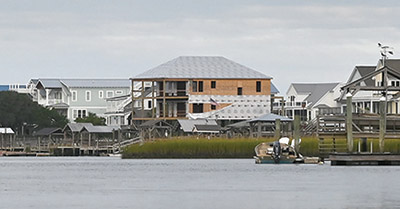 Commission members question whether the roof pitch on a house under construction on the north end complies with the town code.

With architectural guidelines in place, the town of Pawleys Island needs its own building inspector to enforce them, Planning Commission members say.

They made their third pitch in three and a half years to Town Council to take back plan review and inspections from Georgetown County and hire a private firm to do the work.

“We will be able to control our own destiny,” said John Hildreth, who chairs the commission.

The issue was first raised by Administrator Ryan Fabbri in 2018. He was concerned at the time that work was being done without permits. Since county inspectors only came to the island for building inspections, they weren’t catching the unpermitted work. The Planning Commission endorsed the idea, but Town Council never took up the recommendation.

In June 2020, as the commission worked to craft a set of architectural guidelines for new houses, the issue reemerged. The owner of a contract inspection service, CC&I, outlined how the services worked. The company is used by about a dozen local governments across the state and has worked for Georgetown County.

Under the agreement with Georgetown County, which began in 2005, the building department keeps all the fees collected in exchange for reviewing plans and conducting inspections. CC&I would give 20 percent of the fees to the town.

Council Members Guerry Green and Rocky Holliday thought it would add another layer of bureaucracy to the town and lead to higher costs for property owners. The fee arrangement would give the contractor incentive to look for work being done without a permit, Green said.

The town’s building requirements vary from the county’s. For instance, the town requires pervious surfaces for driveways and has a higher flood elevation for structures that helps owners get discounts on federally-subsidized flood insurance. It also requires a 7/12 roof pitch.

Hildreth said a house under construction on the north end of the island appears to have a roof that doesn’t meet the required pitch.

“I don’t want to be relentless,” he said, but he asked Fabbri to check with the county to see if it complied.

Fabbri was told that it did.

With a new set of guidelines for new homes, it’s important to catch problems early, commission member John LaMaster said. He noted that the agreement with Georgetown County provides that it can be terminated with 90 days notice.

Hildreth said he talked with the owner of CC&I, Wayne Willis, and told the commission that the permitting process would be able to account for the review by the town Architectural Review Board.

“We could bring him back here,” Hildreth said, noting the two prior endorsements by the commission.

The commission’s third recommendation went to Town Council last week. It was not included in the agenda, but Mayor Brian Henry said it was something that needed to be discussed.