Planners ‘Say No to Rezone’ 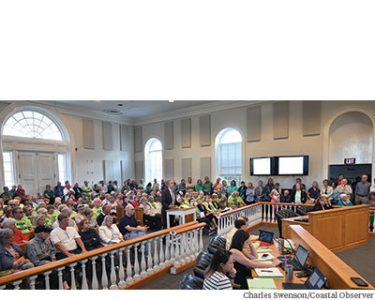 Opponents packed the room for last week’s public hearing on the proposal.

Hundreds of area residents packed into a meeting last week to oppose a zoning change that would replace 17 vacant tennis courts with 19 residential lots. About two thirds filtered out before the Planning Commission voted down the proposal, but the cheering still echoed through the room.

AmeriBuilt Homes has an option to buy 8 acres at the former Litchfield Racquet Club from Founders National Golf. The company is the second to present plans for the site. Its previous plan for 32 lots was withdrawn before it could come up for review. Another developer proposed 108 one-bedroom condos on the site in March. That proposal was also withdrawn.

The club, which closed to play a year ago, is a “planned development” so any change in use needs county approval. The zoning was first approved in 1987 with 25 multi-family dwellings along with 27 tennis courts. The zoning has been changed over the years, most recently in 2005 to allow 20 duplexes and 17 courts.

The current plan, if approved, would have a total of 39 dwellings on 11.4 acres and no tennis courts. The clubhouse would remain for limited commercial use.

“This is a medium density proposal,” Dan Stacy, attorney for AmeriBuilt, told the commission at a hearing last week.

At 10,000 square feet, the proposed lots would conform to the zoning in the adjacent Litchfield Country Club.

Although planning staff raised concerns about the impact of traffic on Highway 17 in earlier proposals, they determined the change from a tennis center to homes would only add 84 more trips each day. That plus the addition of buffers, a walking path and about 1.5 acres of open space prompted the staff to recommend approval.

He acknowledged the opposition, but said “all political issues aside, this is a good rezoning for a functionally obsolete tennis facility.”

“The present density, the way it’s zoned, is zero,” said Cindy Person, a country club resident, who added that neighbors relied on the existing zoning when they bought their homes.

Lane Pratt lives across the street. “I don’t get to change my stuff. I don’t understand how somebody else can get to change what they bought when they knew what it was,” he said.

The racquet club closed to play on Halloween 2018.

Opponents told the commission that allowing redevelopment of the racquet club for homesites will set a precedent for changes at the area golf courses owned by Founders Group.

“It will be the beginning of a step down a very slippery slope,” said Mary Beth Klein, a Pawleys Plantation resident and leader of the opposition group Keep It Green. “It’s not your job or the council’s job to figure out a way for this developer to make money.”

Perry Shelley told the commission that two offers were made to the Founders Group by people who want to buy the site and reopen the club. “There is a viable group that is ready, willing and able to buy the property,” he said.

Shelley said both offers were refused.

Stacy said he presented two proposals to the prospective buyers and got no reply. “It used to be a tennis club, but now it’s not,” he said.

Commission members questioned whether the proposal would impact drainage in the area and wanted to know what types of trees will be planted to replace the 24 from protected species that will be cut as part of the development.

Tim Harris, the project engineer, said the project will be required to retain more stormwater on site than the tennis courts. Boyd Johnson, the county planning director, said replacement trees will come from the list of protected species.

“The expectation of the county was that it was going to remain green space. Is that true?” commission member Sandra Bundy asked.

Johnson said there was no written record to show the open space was an offset for the residential development. “We’ve heard that,” he added.

The room was silent when Elizabeth Krauss, who chairs the commission, asked for a motion.

“To get it over with, I move we approve it,” commission member Johnny Weaver said after a prolonged pause.

Johnson said the commission needed to make a recommendation. Under its rules a failure to act is deemed to be approval.

Bundy and Zach Grate joined in voting it down.

Weaver, Krauss and Freddie Hill voted against denial. They said afterward they were concerned that restricting the use to a tennis club was unfair to the owner. But Krauss and Hill noted they understood the concerns of the community and didn’t offer a second to Weaver’s motion.

The recommendation now goes to County Council. It will show up on the agenda Nov. 12 for first reading, which is usually approved without comment. Second reading will be held Dec. 2.

If the council adopts the Planning Commission recommendation to deny the change, the owner will have to wait a year to submit a new request. However, the owner can also ask to withdraw the request.