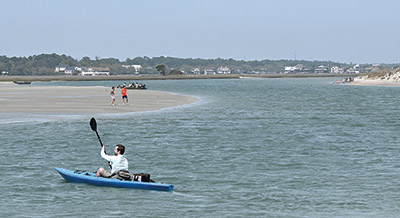 Shoals in Clubhouse Creek at Litchfield.

Property owners in the Litchfield Beaches are gathering information about dredging shoals in Clubhouse Creek to keep it from filling in.

“The creek is silting pretty bad,” said Lex Reynolds, a board member of the Litchfield Beaches Property Owners Association. He lives on the creek at Litchfield Beach. “I’ve watched it for years. There’s no question it’s filling in.”

The question is who can afford to do anything about it if they can obtain state and federal permits.

The project wouldn’t be eligible for federal funds, according to Tommy Fennel, the chief of the Conway field office of the Army Corps of Engineers.

“The silting in over time of creeks along the coast is a hot topic all along the eastern seaboard,” Fennel told Reynolds in a letter. “The first question people often have is ‘who is responsible for dredging the creek?’ ”

The POA is talking with regulators to determine how to move the process forward.

“I really think this is worth pursuing,” said Cindy Kerr, who recently stepped down as president of the POA. She suggested approaching Georgetown County to take the lead.

The association is voluntary, but it has about 800 members in North Litchfield and Litchfield Beach. About a quarter are in Litchfield Beach, but the creek is important to owners in both areas, Kerr said.

“This impacts the whole stormwater runoff system,” she said.

The state of the creek, which runs from Litchfield by the Sea to Midway Inlet, gained attention last year when a group of property owners in the gated Inlet Point South community at the tip of Litchfield Beach applied for permits for beach renourishment. The project drew opposition from neighboring areas where owners were concerned about the impact of the project. Many suggested that dredging sand from the creek would be a better alternative.

Engineers ruled that out, saying there isn’t enough sand in the creek to fill the need on the beachfront. In addition, that sand would be mixed with mud.

Between November 2008 and April 2007, the town of Pawleys Island dredged nearly 40,000 cubic yards of sand from the creek and the north and south ends of the island and placed it on the beach. The project was the result of about 20 years of discussions. It wasn’t until 2004 that the town received its first permit.

The town came back in 2020 with a project that placed over a million cubic yards of offshore sand on the beach. That project drew criticism from some south end property owners who feared the renourishment sand would wash into the creek during a hurricane.

The town made creek dredging at both ends of the island part of a strategic plan Town Council adopted last year.

The creek at Litchfield has never been dredged. “At low tide, you can walk across it,” Reynolds said.

The POA is also continuing its search for a solution to another shoal: one that floated down Flagg Pond at North Litchfield during Hurricane Dorian in 2019. It came to rest, along with its trees, near Boyle Drive.

The pond collects stormwater from the area and has been dredged twice in the past. It’s also privately owned, Kerr said.

Georgetown County has said it won’t remove the once-floating island even though it is working on a stormwater project on Boyle Drive. The POA agreed to get a cost estimate.