POA takes speeding issues to the next level – Coastal Observer

POA takes speeding issues to the next level 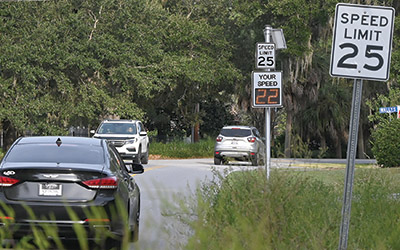 One of the two speed displays installed at Litchfield Country Club.

Property owners in one of the area’s oldest neighborhoods hope they have found a solution to one of their oldest problems.

The $12,000 solution to speeding in Litchfield Country Club was launched this month with a pair of radar displays that let drivers know how fast they are going.

“This is not a new issue. It’s a very widespread issue,” said Jerry Oakley, president of the property owners association and a former County Council member.

Complaints about speeding that he heard about during his two terms on council, which ended in 2014, were still the top concern at the association’s annual meeting this year, he said. It approved $10,500 to buy two radar displays along with money for engineering and insurance. The state Department of Transportation issued permits for the displays on the west end of Hawthorne Drive and the east end of Crooked Oak Drive. The Georgetown County Department of Public Services installed them.

“They serve two purposes,” Oakley said. “They remind drivers of what the speed limit is; they call the attention of drivers to what his or her speed is.”

The sites were selected because they fall along a route between Highway 17 and Kings River Road and have the highest traffic volume.

Between the two studies, residents had put up signs encouraging people to slow down and used a portable speed trailer from the sheriff’s office to do what the radar displays will now do permanently.

“It’s been an issue we’ve been working on for years,” Oakley said.

The displays show the speed of approaching vehicles. When that speed goes above a certain limit, the message changes to “too fast.”

“These devices are pretty sophisticated,” Oakley added. They can be set to accommodate temporary speed changes, such as school zones, and for different times of day. But the message selection is limited.

The displays also collect data about the time and speed of passing vehicles, so the association may not need another study from the regional group.

The Georgia company that makes the displays told him he would probably get calls from other neighborhoods that want them. Oakley said he would be happy to help.

“You just have to go through the process,” he said. “It’s all about safety.”