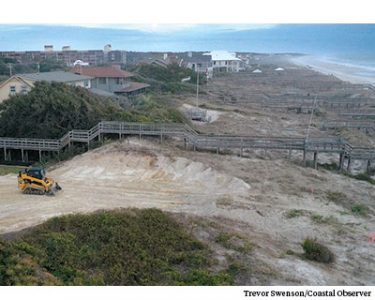 The POA is also working on a zoning change to establish a beachfront building setback.

The creation of a new oceanfront lot at North Litchfield has prompted the area property owners association to ensure that Georgetown County is aware of deed restrictions in the area that prohibit subdivisions. By one estimate, 10 percent of about 700 lots are large enough to be subdivided under the current zoning if the restrictions aren’t enforced.

“I think it’s worth researching the 60-some beachfront properties,” said Cindy Kerr, president of the Litchfield Beaches Property Owners Association.

The association has the right to enforce deed restrictions that were put in place by one of the original developers. Those were enforced for many years by the Litchfield Co., which assigned its rights to the POA in 1997 as part of a deal to head off an effort to form a town in the area.

Last year, a property owner obtained county approval to subdivide an oceanfront lot that is subject to restrictions put in place by another early developer, the Boyle family. That led to a lawsuit by neighbors who claim that the Boyle restriction against subdividing the lots is still in effect. The owner, Shoestring Retreat LLC, claims the restriction on that parcel was lifted in the 1970s.

A building permit for a house on one of the lots was issued this week by Georgetown County.

State law requires people who apply for local planning approvals to disclose whether the proposed activity violates deed restrictions. A permit cannot be issued until the applicant proves that the restriction has been released. In the case of the lot at 183 Summertime Lane, the previous owner, Katherine Haun, told the county no restrictions applied when she sought subdivision approval.

Haun later sold the property for $1.7 million to Shoestring, whose principals are Robert and Holly McManus.

The law didn’t require the county to research Haun’s claim that there was no restriction on subdividing the lot. But if the county had “actual notice” from another source it could have held up the approval.

The POA agreed to research the deed restrictions on the oceanfront lots and provide that information to the Georgetown County Planning and Zoning office. Kerr told the board she happened to have copies of two sets of restrictions that prohibit subdividing lots. “It’s the very first covenant. It’s not like it’s buried,” she said.

Bert Shell, a North Litchfield resident, urged the association to do the same thing for other lots in the community. “Another year of inaction could put other properties at risk,” he said.

Kerr agreed, but said the association will start with the oceanfront lots.

“It would be in the community’s best interest to look at all 700 lots,” she said, adding that the potential for subdividing lots “has huge implications.”

Neil Williams, a board member, pointed out that the association hasn’t always succeeded in enforcing the restrictions assigned by the Litchfield Co. The Circuit Court allowed a property owner to build an addition on the ocean side of his house over the objection of the POA, which said it violated the 1959 deed restriction that no structure “could be nearer that 100 feet from [the] high water mark.”

The restriction cited a contemporary map, but when the addition was built in 2004 it was over 100 feet from the high water mark. The court ruled against the association, saying the restriction was “ambiguous.”

The association has been working with North Litchfield property owners to adopt a zoning change that will establish a beachfront setback. That would limit the potential for conflicts as new houses are built closer to the ocean than their neighbors. It would also shift enforcement from the POA to the county.

Twenty owners of 21 of the northernmost lots have agreed to the concept, Kerr said.