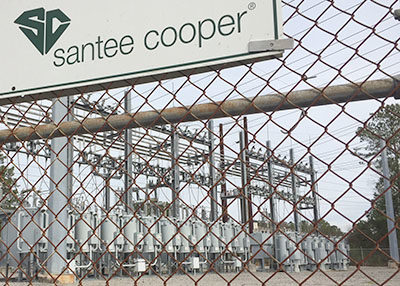 Although the utility has retail customers in three counties, is provides electricity to 2 million people across the state.

Concern about the future of electricity rates in the wake of the failed V.C. Summer nuclear plant offers the Waccamaw Neck Council of Property Owners Associations an opportunity to raise its profile as a community forum, but members decided this week they want more information themselves before tackling the issue.

The council, whose membership includes over 50 associations, was asked to endorse the sale of Santee Cooper, the state-owned electric utility, in order to avoid shifting its $8 billion in debt to ratepayers. “They don’t generate power economically enough to make up the difference,” Tom Swatzel, a political consultant and former Georgetown County Council member, told the POA council’s board. “Santee Cooper can’t manage its way out.”

Swatzel told the POA council he is only representing himself on an issue that he called a “ticking time bomb.”

He asked the group to contact state lawmakers and encourage its member associations to do the same. “This is something they can use as ammunition” during debate over any proposed sale of Santee Cooper, Swatzel said.

A committee of legislators and Gov. Henry McMaster is reviewing proposals from potential buyers of the utility, formally known as the S.C. Public Service Authority. Criteria include settling the debt ($4.3 billion of which comes from the nuclear plant), maintaining low rates and maintaining the existing Santee Cooper workforce. “All these requirements seem like common sense,” Swatzel said.

But he cited the “golden parachute” paid to the Santee Cooper executive responsible for the failed project, a partnership with SCE&E which has now been sold to Dominion Energy, as its poor record on renewable energy as reasons to support the sale.

Swatzel also cited a report by the Palmetto Promise Institute that the cost of the debt could add $650 a year to bills for residential customers and up to $80,000 for industrial customers of Santee Cooper.

Tom Stickler, who chairs the POA Council, agreed with Swatzel on the renewable energy. He said he worked on a solar project with a Santee Electric Co-op customer who was able to get a net metering deal that Santee Cooper doesn’t provide, even though the co-op resells power bought from Santee Cooper.

Stickler was less accepting of the Palmetto Promise numbers, noting the intitute is a conservative think-tank founded for former U.S. Sen. Jim DeMint. He said he would like to see some other figures.

Sherry Marnell, a POA Council board member, asked who opposes the sale.

Swatzel identified lawmakers in Berkeley County, where Santee Cooper has its headquarters. But he added “there’s a concern that the legislature won’t vote to sell it, which is the only way to protect ratepayers.”

Swatzel cited a poll by the S.C. Club for Growth, another conservative group that advocates the utility’s sale, that found that fewer than half the people in the state are aware of Santee Cooper’s role in the nuclear plant’s failure.

That was also a concern to POA Council members. The group has looked for ways to increase its membership and its profile. It used to hold forums on topics of public interest, but in recent years had limited itself to one annual meeting with declining participation.

“Santee Cooper is one of the biggest things that will affect residents,” Greg Kinzie, a board member, said. “It would be a good topic for a meeting at the library.”

“I like the idea,” John Morris, a new board member, said.

But Morris and others agreed they would like to find speakers on both sides of the issue. While the legislative session started on Tuesday, they anticipate holding a forum in April.

“Everybody’s going to be impacted by this,” Swatzel said. “The reality is South Carolina needs to get out of the electricity business.”