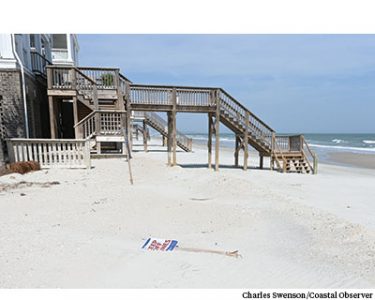 The project includes a 6-foot-high dune along portions of the beachfront.

Property owners at the south end of Litchfield Beach plan to bring sand from inland rather than offshore to build up the beach and dune. The work will require 100 to 150 truck trips a day for about three months.

No sand is proposed in front of Inlet Point South, an area with 26 beach- and creek-front homes.

“There are some owners along the Inlet Point South area that preferred not to be included,” said Steven Traynum, the project manager for Coastal Science and Engineering. “It’s not ideal. With a big storm event, that would certainly be the weak point.”

The Peninsula POA applied in April for permits to place up to 700,000 cubic yards of offshore sand along nearly a mile of beach in front of all three portions of the gated community at the end of Norris Drive. The cost was estimated at $12 million. Owners  at Inlet Point, but outside the Peninsula, said they faced paying hundreds of thousands of dollars in assessments for a project that would primarily benefit the 33 lots.

Scores of property owners filed objections with the state Department of Health and Environmental Control and the Army Corps of Engineers, which must approve the project.

Mary Shahid, an attorney with Nexsen Pruet, represented 39 Inlet Point owners. “There is no consensus  in the Peninsula / Inlet Point / Inlet Point South communities regarding the proposed renourishment,” she told the agencies this spring.

Shahid said this week she had not yet spoken with her clients about the new permit application, which is open for public comment through July 31.

The cost of trucking sand was estimated to be $3.25 million for up to 150,000 cubic yards, according to a letter sent to the Peninsula members in May.

The revised project proposes adding 150,000 to 200,000 cubic yards of sand to the beach between December and March. Another 100,000 to 150,000 yards will be added the following winter, according to the permit application.

The balance of the 450,000 yards would be available if needed for the next three years of the five-year permit.

The sand will create a berm up to 6 feet above the current level of the beach. In areas without a dune, one will be created: up to 6 feet high and 15 feet wide.

Using inland sand will ensure that the material is compatible with the existing beach sand, according to the permit application.

One concern raised by opponents to the offshore sand was the quality of sand placed on Pawleys Island during a renourishment project completed earlier this year. It contained some mud and shell.

“With a trucking project, sediment quality can be observed in the borrow pit as trucks are loaded and unsuitable material can be avoided,” according to the application.

The project will bring in about 2,000 cubic yards of sand a day. The contractor would use 10 to 15 trucks, Traynum said. Each would make about 10 trips a day. Those are expected to take place during daylight hours.

“There’s likely to be very little damage to the roads,” Traynum said. “The biggest issue will be with the number of trips.”

Cindy Kerr, president of the Litchfield Beaches Property Owners Association, said she was unaware of the project, but would review the application. The association includes owners just north of Inlet Point.

“That’s an awful lot of dump trucks,” she said.

Comments can be made online at scdhec.gov by going to the environment tab.