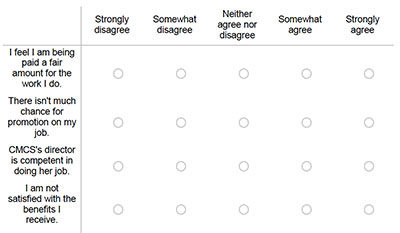 Part of the survey mixed questions about the director with those about job satisfaction.

A survey that the former director suggested to find out why teachers and students were leaving Coastal Montessori Charter School turned into a poll on her management of the school, according to documents obtained under the Freedom of Information Act.

The school’s board released the questions, but not the answers.

Nathalie Hunt suggested the survey at a Dec. 17 meeting of the school’s board. At the time, the school had been dealing with a large budget deficit caused by an error in how the school district calculated its funding.

Board chairman Ryan Fabbri said there was talk that teachers were worried about the future of the school.

“It was more focused on the happiness of the teachers,” Fabbri said. “How satisfied they were with the work environment.”

The board approved a survey during an executive session at the meeting, and tasked board member Jessica Doll with creating it. Doll is an assistant professor of management and decision sciences at Coastal Carolina University.

“It was decided that we would allow her to craft what the questions would be,” Fabbri said.

After creating the survey, Doll emailed it to the board members and Hunt. Fabbri said none of the board members expressed concerns so it was sent to staff  on Jan. 7. There were 135 items on the survey. A third of them were about Hunt or her job performance.

In refusing to release the results of the survey, the charter board cited a section of the Freedom of Information Act that allows information to be withheld if “public disclosure thereof would constitute unreasonable invasion of personal privacy.”

Board vice chairman Kelly Hayes wrote in an email that since the survey related to the job engagement and satisfaction of employees and Hunt’s job performance, the responses “are likely appropriately classified as confidential personnel records.”

Hayes also wrote that a number of employees had objected to the release because they had been promised that the responses would be confidential.

After consulting with the attorney for the S.C. Press Association, the Coastal Observer asked the board to reconsider its decision, saying there is no expectation of privacy for public employees engaged in public duty. The school has not yet replied.

Nathalie Hunt during school construction in 2016.

On Jan. 9, Hunt sent a letter to the board expressing her concern that it was undermining her position. “At that point it didn’t make much of a difference,” Fabbri said.

The next day, Hunt submitted her resignation effective June 30. She announced her decision in the school  newsletter on Jan. 14. On Jan. 26, the board informed the school district that Hunt was no longer the director.

Hunt also sent her resignation and a link to the survey to county Superintendent Randy Dozier. He said that was the first he had heard about it and he did not take the time to review the survey thoroughly.

“I only knew about it after the fact,” he added.

Dozier said the district will occasionally use a survey to get information about what’s going on at a school, but “you have to be very careful how you construct the questions.”

He prefers going to a school himself, or sending another district employee or retired principal, to spend time with students and staff.

“It’s kind of hard to capture what’s going on with a survey,” he said “You really need to spend some time there. … We’ve done some of that this year.”

There are also people who prefer to talk about issues rather than answer survey questions.

“That’s why we have parent cabinets and student cabinets,” Dozier said. “I get a lot of information that way.”

There are also times when teachers reach out to Dozier confidentially to express concerns.

Three parts of the Coastal Montessori board’s survey were only about Hunt.

• is interested in building a quality school which provides quality education;

• carries out the evaluation program as it is outlined;

• listens to the views of teachers and implements their recommendations when feasible;

• earns respect from teachers; maintains privacy in regards to personnel issues or conflicts;

• is consistent in enforcing policies, rules, and procedures with teachers and staff;

• and appropriately follows policies, rules, and procedures as they related to her role in the school.

The second part had eight statements related to “perceived supervisor support.” Respondent’s were told to consider Hunt as the supervisor when choosing an answer ranging from strongly agree to strongly disagree.

There was also a 24-question organizational culture assessment, where the answers ranged from “does not describe CMCS at all” to “describes CMCS most of the time.”

At the end of the survey was an optional section about position and length of time at the school. The respondents were asked to answer the questions if they felt “comfortable” so the board could better interpret the survey results. They were also told that “all results will be reported in the aggregate to better assure anonymity.”