Police track another kind of speeding when storms threaten 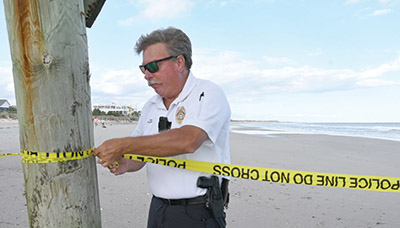 Weather issues are a growing part of duties for Pawleys Island Police.

Now, Pawleys Island Police have a BT-100, which measures  speed.

He put it through its paces as Hurricane Nicole moved through the South Atlantic toward Florida earlier this month.

“I’m sure we had winds over 45 (mph) sustained,” Fanning said. “We were definitely getting gusts about that.”

Fanning got the idea from former Midway Fire and Rescue Chief Doug Eggiman, whom he had seen with a similar hand-held wind gauge. He bought one online for about $25.

“I figured we could afford it,” Fanning said. “Weather conditions have been more impactful than crime has been on the island of late.”

The town has relied on notices from emergency management agencies about wind conditions during previous storms.  He said none were issued for Hurricane Nicole.

“With the weather apps, you get the wind from Winyah Bay or Springmaid Pier,” Fanning said. “It’s good to have on-the-ground knowledge.”

The wind from Hurricane Nicole held the high tide in Pawleys Creek and caused flooding on the roadways. Conditions such as those are one focus of a plan for adapting to sea-level rise that the town is expected to adopt before the end of the year.

“We very much need to adopt it officially because this is what we’re going to use to get grant money,” Mayor Brian Henry told Town Council last week.

It calls for a program of drainage and other infrastructure improvements, mitigation projects and policy changes to address flooding from the creek and from stormwater. Town officials are reviewing a draft, and Henry said he plans to bring it up for a vote in December.

With Hurricane Nicole following Hurricane Ian, he said, “we’re reminded of how important this plan is.”

A proposal to create a King Tide Operations Policy needs to move to the front of the timetable, Henry said.

“We know when these King Tides are coming,” he said. “We know it’s going to flood.”

The next King Tide is due on Thanksgiving. The tides are higher than the spring tides that occur with new and full moons

Police put out information about those conditions on social media to notify residents and visitors. They also put up signs on the roads. Fanning told the council there is also an effort among meteorologists to increase awareness.

“We can do a lot for ourselves,” Council Member Rocky Holliday said. “When you rely on the weather channels, they’re not here on the ground. They don’t know our weather conditions.”

Fanning said afterward that was his thinking when he bought the anemometer. In fact, he’s been told by the National Weather Service and meteorologists that they rely on others for local conditions.

Holliday said he would like the town to do something about people driving through floodwaters. Last week, he saw one truck drive by his house on Myrtle Avenue pushing water over its hood.

“We have so many joyriders out there,” he said. “They’re just causing erosion.”

It would require police to witness the offense in order to write a ticket, Fanning said, but that would require driving the town’s vehicles in the saltwater.

Even then, he said he was unsure whether the law on driving too fast for conditions would apply.

Mostly, the flooding is an inconvenience more than a threat to safety, Fanning said afterward.

But he recalled one incident at night where a car tried to turn around rather than drive through the water. The car ended up driving into the creek.

“They had to climb out the sunroof,” Fanning said.

Flooding also came up during a public hearing on a proposed ordinance that would require review of trees and landscape at new homes by the town’s Architectural Review Board. Ezra Oyer, a north end property owner, suggested the town prohibit using pilings for landscaping. He had seven wash into his yard.