Polls workers ready to bow out of primary – Coastal Observer

Polls workers ready to bow out of primary 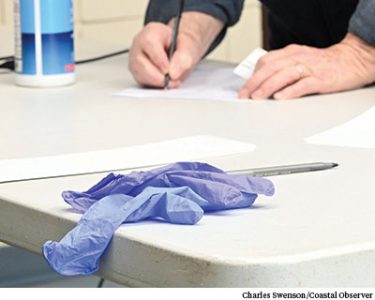 Gloves were an option for poll workers during the February presidential primary.

People who run the polls are telling election officials around the state they don’t plan to work for the June 9 primaries because of the coronavirus pandemic.

Dean Smith, who chairs the Georgetown County Board of Registration and Elections, told state lawmakers last week he had already heard from several poll workers who plan to sit out the primary and that some precinct locations won’t be available for voting.

“I usually go in and count votes and process absentee ballots on Election Day. I won’t do it,” Smith said, because his age puts him at risk of COVID-19.

Smith’s wife, Rita, is the poll clerk at Pawleys Island 2, the county’s largest precinct with over 3,000 voters. She said neither she nor her poll workers plan to work the June primary.

Party leaders in the county say they have heard similar concerns since poll workers are often older, retired people.

“There’s certainly a lot to be concerned about with the election,” state Sen Stephen Goldfinch said. “There is no desire to move the primary. There is a desire to allow people to vote and maintain social distance.”

Two fire stations in Murrells Inlet that serve as polling places won’t be available for the June primary.

“We are extremely hesitant just because having several hundred to thousands of people come through on department property would not only put us at a risk for potential exposure, but for them to come into contact with us,” Murrells Inlet-Garden City Fire Chief J.R. Haney said. “We’re the ones that are transporting several people a day with symptoms.”

While COVID-19 remains a threat, “this is probably going to be our new norm,” Haney said.

While some restrictions on public gatherings may be lifted by June, Goldfinch said “there will still be a mindset of not wanting to show up in crowds. That may cause very, very low turnout.”

He and Goldfinch expect that the state will relax restrictions on absentee voting. Voters are now required to cite one of 18 reasons for requesting an absentee ballot, “none of which include self-isolating due to a pandemic,” Marci Andino, director of the state Election Commission, noted in a letter last month to the governor and legislative leaders.

Andino urged the state to allow online requests and online access to their ballot, something current law allows for the military.

The county Republican Party has always urged its members to vote absentee as a way to reduce congestion at the polls and boost turnout, said Karol Anderson, who chairs the party.

She has supported efforts by the county election board to encourage people who use curbside voting to vote absentee because of the difficulty of moving the voting machines outside the precincts.

After talking at the annual meeting of the S.C. Association of Registration and Election Officials last month, Goldfinch said he thought that expanded curbside voting could help with the June primary. “The machine could be touched with a Q-Tip,” he said.

Goldfinch acknowledged problems with the size and weight of the voting machines, but said those could be overcome.

“I would support more options for absentee voting, and vote-by-mail would be fantastic,” said Deb Smith, who chairs the county Democratic Party.

The association of election officials endorsed voting by mail as “the best option” for addressing health concerns and maintaining voter turnout.

It would also require action by the legislature, and Goldfinch said that is unlikely because of the politics behind the issue and the fact that the legislature isn’t meeting.

“Let’s just do what we can do between now and June,” Goldfinch said.

Hewitt called the expansion of absentee voting “reasonable,” but agreed there is opposition to voting by mail.

One thing the legislature could do, Goldfinch said, is recall the House to pass a bill approved by the Senate that would allow county elections officials to start processing absentee ballots the day before the polls open. The state Election Commission supports the bill because it will allow officials to report the results on Election Day even with a rise in absentee ballots.

Hewitt shared the concerns of the local elections officials with the House leadership and the governor. “I hope this is something they would address sooner rather than later,” he said.