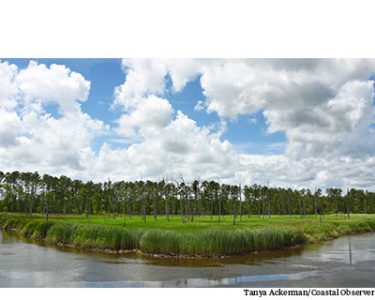 The Pennyroyal Industrial Park is bordered by the Sampit River.

Georgetown County will use $3.75 million collected from a capital projects sales tax to buy 948 acres on the Sampit River for an industrial park. The county has until the end of the month to exercise an option on the former timber company tract it obtained in 2017.

The money is part of a $16.9 million surplus collected from the sales tax approved by voters in 2014. The 1-cent tax was designed to raise $28.2 million for a Murrells Inlet dredging project, road improvements, rural fire stations and a fire station for the town of Andrews. It also included $6 million to match federal and state funds to dredge the ship channel through Winyah Bay, a project that was dropped after the cost estimate from Army Corps of Engineers doubled to $66 million.

Over four years the tax raised about $41 million. It expired at the end of April.

County Council has approved plans for another capital projects sales tax that will be placed on the ballot in November 2020. The county needs to spend the surplus from the last tax before the referendum. Under state law, the council is limited to projects that reflect the same goals as the 2014 referendum.

The industrial park is seen as an economic development component akin to the port dredging. The council this week also approved $1.5 million to honor a prior pledge to help fund the Advanced Manufacturing Center that opened this year at the local campus of Horry-Georgetown Technical College.

The Sampit River property, southwest of Georgetown, was rezoned to allow industrial development over the objection of area residents who said there was already too much industry in the area. It is across the road from Santee Cooper’s Winyah Generating Station and American Gypsum’s wallboard plant. There is a 3V Sigma chemical plant upstream.

“This is a developable site and a site that gives us a competitive advantage,” Brian Tucker, the county’s economic development director, told the council this week. “Georgetown County is not located on an interstate. That is a huge hurdle for us. This site helps us overcome that hurdle.”

The property, known as the Pennyroyal Industrial Park, has rail and barge access. It also has access to natural gas. Although Santee Cooper plans to close the coal-fired power plant over the next eight years, (Story, Page 6) County Administrator Sel Hemingway said that could prove to be an advantage for the industrial park.

The industrial park is also in an Opportunity Zone, created in the 2017 federal tax law, and allows buyers to defer capital gains by investing in property. Tucker said that will help attract developers who work with industrial clients.

The county got $230,000 from Santee Electric Coop, which would sell power to facilities on the site, to complete environmental surveys and other assessments. Those are now complete, Tucker said.

The sale should close by the end of the year.

The council will still have to decide how to spend the balance of the sale tax surplus.

If another capital projects sale tax is approved in 2020, that revenue will be the sole source of capital improvement funding. This week, the county completed its current capital plan, which includes $36 million for a new jail, a project that hasn’t been formally approved.

Council Member Steve Goggans convinced his colleagues to add $200,000 to the $500,000 allocated for bike paths. The county hopes to match that with grant funds.

Goggans said the county should use the money for design and permitting even if it can’t secure grants for construction. But he added, “a grant is easier to get if the project is ready to go.”