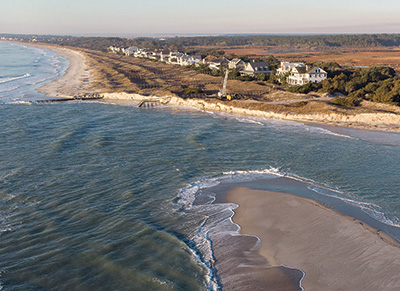 Pawleys Inlet has migrated south in front of the Watts property.

Sand from the Pawleys Island beach renourishment project has altered the course of Pawleys Creek and put a house on the neighboring Prince George tract in danger of being washed away within weeks, according to a suit filed last week in Circuit Court.

Bud and Melesa Watts are seeking to enjoin the state Office of Ocean and Coastal Resource Management from blocking their efforts to install a revetment to limit the erosion. The agency ordered work to stop on the 300-foot-long rock and sheet pile structure last month.

Judge Ben Culbertson this week granted a temporary restraining order that allows work to continue for 10 days until a hearing can be held.

In addition to owning a beachfront house and an adjacent lot, Bud Watts also owns 1,065 acres at Prince George that was previously owned by the University of South Carolina Development Foundation. It has also been impacted by the migration of Pawleys Inlet, Watts said in a court filing.

“I had become a student of the inlet and its movements over the years. I had also read a lot about the lifecycles of similar inlets. The more I learned about the massive and unprecedented scale of the renourishment project, the more concerned I became,” Watts said.

In the winter of 2020, the town of Pawleys Island placed 1.1 million cubic yards of sand on about 3 miles of beach starting at the south end.  In the following year, 76,500 cubic yards of sand washed away, most from the south end north of the public parking lot, according to a report from Coastal Science and Engineering, which designed the project.

The one area that gained sand was the area from the parking lot to Pawleys Inlet, about 9,200 cubic yards, according to the report.

In their suit over the revetment, the Watts said that the growth of the spit south of parking lot accelerated from an average of 40 feet a year to 100 feet. As the inlet migrated south, it “wiped out decades-old dune fields and live oak trees on Prince George and now presents an imminent threat to the Watts’ property,” according to the complaint.

They hired the Ben Cox Co. of Andrews to design a structure to stop the inlet from migrating onto their oceanfront property. It would place 35-foot-long sheet piles in the ground on their property and place rock along the outside face of the piles to a depth of 6 feet. The structure would then be covered with sand and vegetation.

They filed a notice of Coastal Zone Consistency with OCRM on Jan. 27 and started work. The agency told them to stop work on Feb. 3.

Chris Stout, manager of the consistency section, said equipment and material had to be moved out of the dune field.

In their suit, the Watts say OCRM doesn’t have the authority to stop the work because it falls outside the agency’s “critical area” jurisdiction. The agency claims it has authority under the Storm Water Management and Sediment Reduction Act, which controls land disturbances. The Watts said the act exempts single-family homes and accessory structures.

In his filing, Bud Watts said the agency “raised and continue to raise multiple technical concerns about the project’s consistency with its policies.”

“We have been patient and cooperative with the process, but the inlet continues to migrate south, and we are quickly running out of time to act,” he added.

Property owners at Prince George have raised concerns about the town’s beach projects in the past.

Administrator Ryan Fabbri recalled receiving a letter from the community’s homeowners association when the town dredged sand from the inlet following Hurricane Matthew.

“They complained that it was causing erosion on their road,” he said. “They were threatening litigation.”

The storm flattened the dune on the south end and 40,000 cubic yards of sand were placed in front of the houses to protect them from the high tide.

After the renourishment project, Fabbri said he asked Coastal Science and Engineering to look at the impact on Pawleys Inlet as part of their annual monitoring.

Bud Watts said in his court filing that “it seemed obvious to me that there was a high probability that the massive sand addition would result in the spit lengthening and the inlet shifting south and severely impacting my property.”

It wasn’t until the fall of 2021, after Coastal Science completed its monitoring report, that Watts found “my worst fears were being realized.”

He said he realizes that his revetment is a short-term solution. “I just don’t have time to wait,” Watts said.

The solution was proposed in 2010 by Tim Kana, principal at Coastal Science. An “inlet management zone” could keep Pawleys Inlet’s migration in check through dredging, he said in a report commissioned by the Prince George residents.

“There’s no way that could ever take place without the cooperation of the town,” Fabbri said, adding that “they’ve never approached us about it.”

But he added,“I’m willing to sit down with the Prince George people anytime they want.”