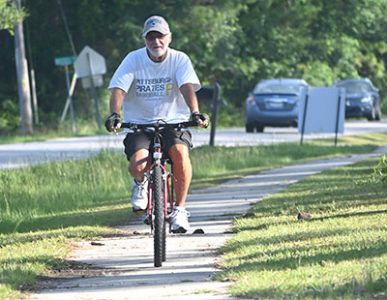 Replacing the decades-old sidewalk on Waverly Road with a bike path would complete the Bike the Neck route.

A plan to spend $362,000 to design bike paths in hope of future funding leaves out the route that Georgetown County Council lists as its top priority.

The council agreed this week to allocate the funds that had been set aside in its capital improvement plan to match grants for bike path construction. The council used $138,000 of the $500,000 to match a $100,000 state grant to connect two portions of the Bike the Neck route at North Litchfield.

The county is wrapping up the capital plan in anticipation of adopting a capital projects sales tax to fund future improvements. By doing design work and obtaining permits on future bike routes, the county will have “shovel-ready” projects for which it can seek grants or sales tax funds, said Ray Funnye, the county’s Public Services director.

“This work will not include any construction,” he said.

The design and permitting will be done for a route along Martin Luther King Road from Parkersville Road to Waverly Road and for Kings River Road from Waverly to Waccamaw High. Those will tie into the existing Bike the Neck path.

The county will also fund a master plan for the Plantersville area in the western part of the county where there is a state-designated scenic byway.

Left off the list is a design for replacing a sidewalk along Waverly Road between Waccamaw Elementary School and Highway 17. The sidewalk was built in the 1980s and is regularly used by cyclists.

The Waverly path is the top priority in the county’s bike path master plan approved by the council in 2017. It is also the priority for Bike the Neck, the citizens group that has led the effort for local bike routes.

“They pay no attention to what I recommend,” said  Linda Ketron, who has led Bike the Neck for 25 years. “My No. 1 is finishing off Waverly Road. That is a mess. It is well-used and would be even more widely used if it was widened.”

Funnye said it is still a priority, but it was the most expensive of the proposed projects to design at $131,050.

“We had to make some tough decisions,” Funnye said.

Council Member Steve Goggans said Martin Luther King was his priority, but he urged council members to follow the 2017 priority list and fund the Waverly Road design rather than the Plantersville master plan.

Council Member Louis Morant, whose district includes Plantersville, said other areas of the county need to have some amenities. “There’s nothing to say that plans can’t be changed,” he said.

Goggans agreed, but said that should be done by reconvening the committee that put together the master plan.

“This is just a start, and an equitable one,” Council Chairman John Thomas said.

Ketron said the Waverly Road section is the last link that will connect other parts of the Bike the Neck route from Pawleys Island to Murrells Inlet. Rather than fund three designs that can’t be built, she said the county should design the Waverly route and apply the remaining funds toward construction.