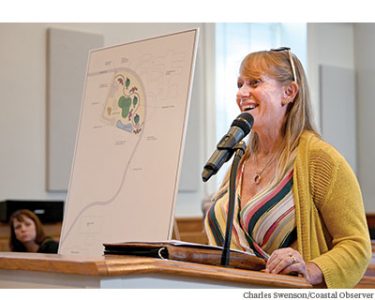 Cindy Bindner is completing a project that her late husband, Jim, began.

Property across from Waccamaw Middle School will become a site for celebration and reflection under a plan envisioned by the late Jim Bindner and being completed by his wife Cindy. Georgetown County Council this week agreed to lease about 7.5 acres to JB’s Celebration Park.

The property is part of 47 acres owned by the county that includes Retreat Park on the east side of Wildcat Way. The land is part of a larger tract that was acquired from Brookgreen Gardens in 1998 through a “friendly condemnation” that allowed construction of the middle school and Waccamaw Intermediate.

Jim Bindner, who was a real estate agent, wanted to create a community park. “He wanted to have a place where people could meet, gather, have all sorts of activities like art festivals, music festivals, after-school programs. Just a central gathering place,” Cindy Bindner said.

A conceptual plan for the Celebration Park.

After Jim’s father died about 10 years ago, he had thought the park would be an ideal place for memorials, too. “A beautiful, joyful place. A place full of flowers and trees and colorful benches,” Cindy said.

The deaths of several people in the community last year, including “children that passed well before their time,” Cindy said. “That got my husband to really work in this project.”

Then Jim became ill. He died in January at age 60.

The council approved a 30-year-lease at $1 a year. The county will maintain the facility, once it is completed.

““My husband was involved in the Crawfish Festival in the ’80s and early ’90s when I met him. So maybe that festival can come back,” Cindy said. “Art, music, culture, even a family movie night. There’s all sorts of things this place could be utilized for.”

The park will be developed through private donations and possibly grants, she said. “It will not cost the county a dime.”

Brian Tucker, the county’s economic development director, has worked with the Bindners on the project. “This property is not currently being utilized,” he said.

Eventually, Tucker said, it could become home to the Pawleys Island Festival of Music and Art, which now holds performances under a tent at the nearby Reserve Club.

The lease requires one more reading by the council. The exact size of the tract will be added once a survey is completed. The property adjoins an out parcel of Brookgreen Gardens which was once a habitat for endangered red-cockaded woodpeckers. An environmental assessment will also be done, Tucker said.

“It will be used for everyone. No one will be shut out and hopefully everyone will enjoy it for decades to come,” Cindy said.