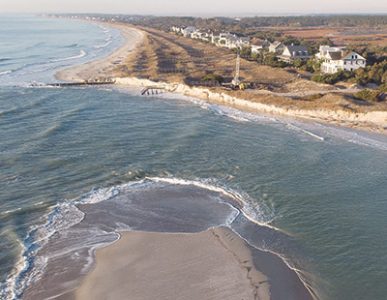 Pawleys Inlet has moved south by about 300 feet in two years, according to a study.

A Prince George couple has filed suit to force the town of Pawleys Island, its contractors and state agencies to restore the inlet at the island’s south end to the channel it followed before a beach renourishment project was completed in 2020.

Over the last two years, Pawleys Inlet has shifted over 300 feet to the south, eroding five acres of beach and dune, and threatening the beachfront house of Bud and Melesa Watts, according to an engineer’s report. Erosion along the west side of Pawleys Creek has also damaged a portion of the maritime forest on the 1,065-acre Prince George tract that Bud Watts placed under a conservation easement.

In a lawsuit filed in Circuit Court last week, the Wattses say the damage is the result of the 1.1 million cubic yards of sand placed on Pawleys Island as part of the renourishment project, and that the damage was predicted in a 2010 study by the same firm that designed the town’s project, Coastal Science and Engineering.

In addition to asking to have the inlet restored, the suit seeks damages for an “inverse condemnation” by the town and state.

Until the inlet is restored, the Wattses want approval “to take reasonably necessary actions to protect their property,” according to the suit.

“I don’t have a quarrel with the citizens and property owners on Pawleys Island,” Watts said in an interview. “I would have wanted the renourishment project myself if I were in their shoes. But they weren’t fully informed about the ramifications of the project. If the citizens had been informed, there would have been a mitigation plan included in the project. What would have been a small cost to deal with is now very big and grows every day.”

The town started working toward approval of a federally-funded beach renourishment project in 1997. The Army Corps of Engineers approved a project to place about 850,000 cubic yards of sand on the narrow southern end of the island in 2006, but the work was not funded by Congress until 2018.

The town decided to move forward without federal funding in 2019 out of concern that the corps would delay work for another year. The $14.8 million project was funded by the town’s beach fund, a loan and a grant from PRT. The scope of the project was expanded beyond the south end, but that was where most of the sand was placed in an effort to build up the beach and dunes to protect houses from erosion.

The Wattses said in their suit that they received no notice of the permit application from DHEC. In approving the project, the agency violated state law and its own policies by failing to consider the impact to adjacent property, according to the suit.

Since the renourishment was completed,  “erosion of the beach and littoral drift have moved massive amounts of sand toward the southern spit, causing the Inlet to rapidly migrate south, which in turn is causing extreme erosion and scarping along the Prince George shoreline,” according to the suit.

The inlet normally moves 18 to 40 feet a year. The sudden shift now has the inlet entrance well below its historic channel, according to the engineer’s report.

Earlier this year, the Wattses installed a revetment on the upland portion of their property to protect their house. DHEC issued a stop-work order, and the couple went to court to get it lifted. The sheet-pile structure was completed in mid-March. Since then, the inlet has moved to the edge of the revetment.

It addition to the money spent on the revetment, the Wattses say the value of their property “has already been diminished by millions of dollars, and much of which will be forever lost to the Inlet.”

Court filings include the 2010 report on Pawleys Inlet prepared by CSE for the Prince George Community Association. It was done after Georgetown County proposed building a 300-foot-long groin in front of the parking lot on the south end of Pawleys Island.

The report proposed creating an “inlet management zone.” That would help mitigate movement of the inlet as the result of beach renourishment.

The suit claims the town and state knew the potential for erosion damage at Prince George from the beach project, but failed to mitigate it.

“It’s ironic that I could protect Prince George Preservation property from development with the conservation easement, but I can’t protect it from a project by my neighbors north of me,” Bud Watts said.