Proposed rules for county meetings can lead to ban for disrupters 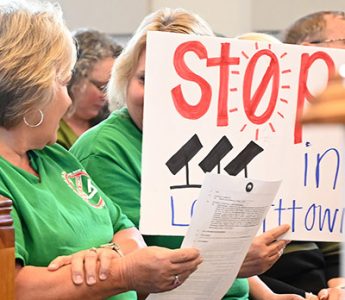 The rules would ban signs at county meetings.

People who disrupt the “peace and decorum” of county government meetings can be removed, and those who are removed face a 12-month ban from attending further meetings under an ordinance up for final approval by Georgetown County Council next week.

The measure passed the second of three readings last week without discussion. That isn’t likely to happen at third reading.

“What happened to the First Amendment?” Council Member Bob Anderson said this week.

The ordinance, which applies to all county boards and commissions, requires the audience and speakers to “conduct themselves in a decent, orderly, respectful and lawful manner.” Those who do not “shall be subject to removal.”

No signs are allowed in public meetings unless they are part of a presentation.

The ordinance also adopts wording that the council chairman currently reads before the public comment period that requires all remarks be made to the board and cautions that speakers “refrain from personal attacks.”

Remarks “shall be made only from the podium or other designated area,” the ordinance states. People who leave that area or approach the board or staff uninvited “shall be subject to immediate removal.”

Those who are removed can be banned from future meetings for up to a year at the “sole discretion” of the chairman.

There is currently no uniform set of rules for conduct, Council Chairman Louis Morant said.

“We want to try to keep things under control and give some guidance,” he said.

Anderson said it’s always been the chairman’s job to control the meeting and maintain decorum.

“This needs to go away. It’s an infringement on people’s First Amendment rights,” he said.

Cindy Person, attorney for Keep It Green Advocacy, is a frequent speaker at meetings. She urges her clients to be respectful. “There are ways to disagree,” she said.

She was surprised there was no discussion about the ordinance.

“There is the First Amendment after all,” she said.

Council Member Clint Elliott, who took office last week, said he saw an early draft. “Hopefully people give it the respect it deserves,” he said. “I’m going to be real interested in how it’s implemented.”