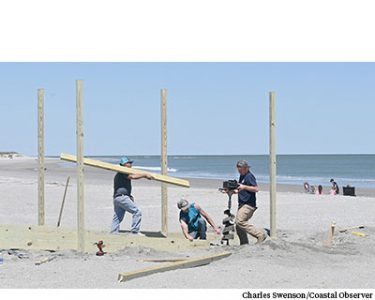 The First Street walkway on Pawleys Island will also be open. It was damaged by Hurricane Dorian and rebuilt this week.

Gov. Henry McMaster closed public accesses on March 30 as part of his emergency measures adopted to slow the spread of the COVID-19 outbreak. Last week, he allowed local government to decide when those accesses should reopen.

County Council initially extended the closure to May 15, but voted this week to revise that after Pawleys Island Town Council, which had planned to open its accesses Monday, agreed to delay the opening to May 1.

The town and the county both cited remarks made by Dr. Gerry Harmon, vice president for medical affairs at Tidelands Health, during an online forum hosted by the Chamber of Commerce last week.

“We don’t want to second guess anybody in leadership positions,” Harmon said, speaking a day after the county extended the closure. “I think it’s going to be OK on the beach. I really do.”

Harmon, who owns a house on Pawleys Island, said exercise will help people ward off other health problems. “We have a great opportunity to stay in shape,” he said.

County Council Chairman John Thomas also talked with Harmon before this week’s meeting. “Our Dr. Fauci, Gerry Harmon, says as long as people are properly social-distancing” there is no public health risk on the beach, he said, referring to Anthony Fauci, director of the National Institute of Allergy and Infectious Diseases. “We don’t want to have a resurgence.”

Thomas said he received “very, very, very many phone calls and emails” after he championed an extension of the closure last week. Since then, he watched the conditions in Horry County, where access reopened last week, and at Litchfield by the Sea, which has private access for property owners in developments on and off the beach.

“I got a sense that people are responsibly social distancing,” Thomas said.

Sheriff Carter Weaver told the council this week that the beach patrol estimate there were over 1,000 people on the beach at Litchfield on Saturday afternoon. Deputies spoke with about 30 groups and asked them to maintain their distance.

“We haven’t had any major issues on the beach,” Weaver said.

He told council that deputies will continue to watch for crowds.

“It’s kind of like speeders,” Weaver said. “We’re not going to be able to catch everyone speeding, but we do have the personnel out there on the beach to ensure that we’re at least reducing the spread by social distancing.”

With the county poised to reopen beach access, Pawleys Island said that reduced their concern that the island would be what Mayor Brian Henry called “the only game in town.”

While confirmed cases of COVID-19 in the county have remained flat (there were 40 total as of Wednesday), “we’re a tourism destination,” Henry said. “It’s a little more complicated.”

He said he posed the question about beach access to Harmon during the forum and was encouraged by his answer as well as by a conversation he had with Thomas.

“No one has a crystal ball to say when it’s safe,” Henry said.

Huntington Beach State Park is also due to open for daily visits on May 1.

Along with the county reopening, “that’s going to eliminate one big problem for us,” Council Member Ashley Carter said.

Also working in the town’s favor, the parking lot at the island’s south end, which has 80 spaces, is ready to reopen. It was closed after Hurricane Dorian last September and then used to stage equipment for a beach renourishment project.

The town will also reopen the access at First Street on the island’s north end. The walkway was destroyed by the hurricane. Rebuilding was completed this week atop the sand from the renourishment project.

“We’ll be back to full strength by Friday,” Fabbri said.