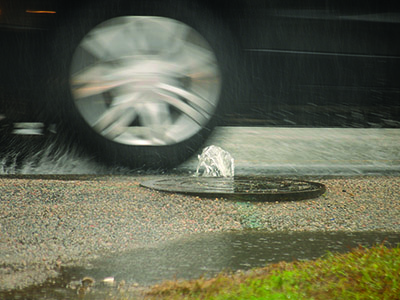 Water spouts from a manhole on Waverly Road during a rainstorm in November 2018.

Thunderstorms that dumped over 2 inches of rain in some areas of the Waccamaw Neck this week should provide a boost to engineers gathering data for the first phase of Georgetown County’s stormwater master plan.

They will launch an online mapping system following a public meeting today in order to tap local knowledge of problems with flooding and drainage infrastructure.

The county hired the firm of Thomas & Hutton last year to create the $702,000 master plan for the Waccamaw Neck’s four watersheds. It will expand the work to the seven other watersheds in the county.

“We happened to start in the Waccamaw Neck area first because it’s densely populated,” said Ray Funnye, the county director of Public Services. “It makes sense to start in that area first.”

The engineers have compiled information about stormwater facilities from years of development plans submitted to the county and merged those with the county’s own records in a digital format, said Rick Karkowski, the project manager for Thomas & Hutton.

“That was a huge step forward,” he said. “We have a full accounting of what infrastructure the county has.”

The next step will be a field survey, but public input will help focus that survey, Karkowski said.

A meeting at 5:30 p.m. today at the Waccamaw Library will provide the public with an update on the plan and show people how to use the online mapping system to report problems.

“Don’t say, ‘it floods there all the time,’” Karkowski said. The engineers are looking for specifics. When did it flood? Was it caused by rainfall or the tide?

“This is for drainage and flooding, not potholes, not road signs, not developer issues,” he said. “This is not Facebook. This is not Nextdoor.”

For people who don’t have online access or can’t use the mapping system, Karkowski said they will have sessions where people can point out problems on paper maps.

The engineers also want to know about clogged ditches, blocked pipes and places were stormwater is undermining roads.

The engineers will collect public data through the end of August.

“This project is going to result in an enormous amount of data,” said Tracy Jones, the county stormwater manager. It will be used  by public works staff, but also by planners as a tool to help manage growth.

Thomas & Hutton will create computer models to show how stormwater flows into receiving bodies such as the Waccamaw River, Murrells Inlet and the saltwater creeks.

“We were never able to look at the big picture,” Jones said.

Now they will know whether a project has impacts upstream or downstream.

Thomas & Hutton plans to complete the project by the end of the year, Karkowski said.

That will include a list of recommended drainage improvements and cost estimates. While the county will then have to find funding, “some projects will stand out,” Karkowski said.

“It’s a big project. It’s near and dear to all our hearts,” Council Member Bob Anderson said.

The county will have a link to the mapping system on its website, gtcounty.org, following today’s meeting.