Second plan for racquet club withdrawn after a week 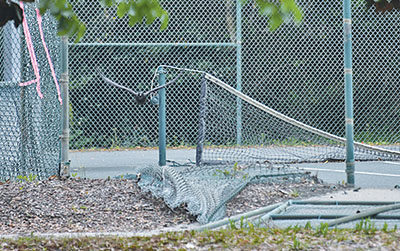 Two plans for the former racquet club have been presented and withdrawn.

A second plan for development of the former Litchfield Racquet Club was withdrawn Thursday, a week after it was submitted to Georgetown County planners.

The revised plan would have replaced the 17 clay courts with 32 single-family lots that would be about half the size of the adjacent residential parcels. At a “typical” size of 4,600 square feet, the lots were smaller than those currently allowed by Georgetown County zoning.

The plan submitted by Wimbledon Village LLC replaced one for 108 one-bedroom apartments on the 8.5-acre site between Litchfield Country Club and the Bridges at Litchfield. That plan, which was withdrawn last month, sought the maximum density allowed under the zoning code, 16 units an acre. The revised plan shows 5.1 units an acre, which is still considered “high density,” Boyd Johnson, the county planning director, said.

The new plan from Wimbledon Village LLC was withdrawn and Johnson said he was told a new plan will be coming from a different developer, RE1 Land Co. That is the company that is developing 14 duplexes in the racquet club “planned ” The company is part of AmeriBuilt Homes of Myrtle Beach. It bought the site of the duplexes from Wilmbledon Village LLC in March. AmeriBuilt is also developing the second phase of a multi-family project at Litchfield Plantation that was started by the principals in Wimbledon Village, Trey Smith and Ted Kirkpatrick.

The plan for 32 lots at the racquet club was withdrawn before the planning staff could advertise it for a public hearing (and before it could cash the check that came with the application). “We’ll just tear up the file,” Johnson said.

The earliest a new plan for the site could come before the Planning Commission would be July. “Based on what I’m hearing, I doubt it will be in July,” Johnson said.

The current “planned development” zoning originally called for 25 dwellings and the tennis complex. So far, three houses have been built and the 14 duplexes are under construction.

Because the project is a planned development, it can seek smaller lots than would be allowed under conventional zoning, Johnson said. “Normally, it’s 6,000” square feet, he said. “It’s not something we will be pushing, obviously.”

The country club property owners association opposed the multi-family plan. It hadn’t had time to meet to discuss the new proposal, but Jerry Oakley, the interim president, said “there is no support for this plan either, primarily because of the very small lots and because its 32 lots are going to dump a whole lot of cars on Highway 17.”

The county planning staff, which recommended against approval of the multi-family project, also urged the Planning Commission to require a traffic study. “Based on what I’m looking at, I think we would want a traffic study” for the revised project, Johnson said.

In its application, Wimbledon Village argued that the 320 trips a day generated by the single-family homes would be less traffic than the tennis courts generated (527 trips a day under a formula used by planners).

The Litchfield Country Club POA continues to be concerned about the loss of green space, Oakley said. The new project includes a community pool and keeps the former tennis clubhouse as a commercial building. The plan shows several areas labeled green space that are smaller than the lots and two larger areas around stormwater retention ponds.

A group of former racquet club members is trying to buy the property from Founders National. Wimbledon Village has an option to buy it.

The concern of tennis players was echoed last month by other area residents who told planners they fear the tennis complex redevelopment could set a precedent for golf course redevelopment.