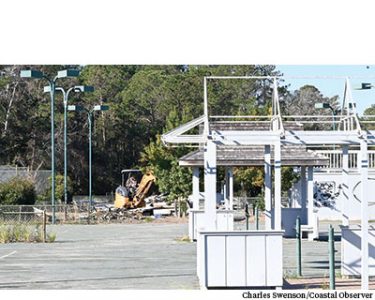 Buildings at the vacant racquet club were torn down in January.

After four failed attempts to change the zoning, the site of the former Litchfield Racquet Club was sold last month by Founders National Golf.

The 8.9 acres was sold to Downtown Litchfield LLC for $550,000. The sale also includes the property at the entrance of Litchfield Country Club now being used for ponds. That property is zoned for residential and commercial development.

The registered agent for the Downtown Litchfield is Greg Weathers, an attorney. Its tax address is Murrells Inlet Properties, whose owner is Chuck Cox. Neither returned phone calls seeking comment.

Cox was involved in the mixed-use development at the southern junction of Bypass 17 and Business 17 and the Clam Bake Cove residential development on Highway 17 at Pawleys Island.

The proposals, submitted on behalf of developers who had contracts to buy the site, met with public opposition and led to the creation of the citizens group Keep It Green.

A group of former racquet club members wanted to buy the property and resume play on the 17 clay courts. They said that Founders National wouldn’t talk to them. The company tore down the clubhouse in January, the same time Downtown Litchfield filed its papers with the S.C. secretary of state’s office.

The racquet club is part of a “planned development” zoning district, which restricts its use.

“Other than putting back the tennis courts, there’s not a lot you can do with it,” said Boyd Johnson, the Georgetown County planning director. No one has approached his department with a new plan for the site, he added.

The property at the entrance of Litchfield Country Club could be developed without a zoning change.

“It would be our hope that any development would be positive and compatible,” said Jerry Oakley, president of the country club property owners association.

Oakley is a former County Council member who recalled talks with the previous owner of the property, Myrtle Beach National, about realigning Country Club Drive so it would connect with the traffic signal on Highway 17 and Litchfield Drive. That would have required cutting through the Litchfield Village commercial district.

Steve Goggans, an architect and land planner, helped Myrtle Beach National with that plan. He is now a County Council member.

“Those ponds are not retention ponds. They are actually decorative,” Goggans said, referring to the country club entrance. They are not part of a stormwater management plan.

“They’ll have to provide some drainage, but they can manipulate those ponds any which way,” he added.

If the new owner submitted a plan for the commercial portion of the property, the first question would be about stormwater. “That would be the overwhelming issue,” Johnson said.

Traffic would also be an issue, particularly if the development required a driveway on Highway 17.

“That’s a bad place to come ask for a driveway,” Johnson said.

A study of the highway corridor being conducted for Georgetown County proposes replacing the traffic signal at Litchfield Drive with four synchronized signals between Crooked Oak Drive and Salt Marsh Cove that would allow U-turns.

While the racquet club zoning change drew hundreds of people to a Planning Commission hearing last year, there would be little opportunity to comment on any development at the country club entrance that complies with the existing zoning.

“If it conforms to the zoning, the community and the county are going to be very hard pressed to stop it,” Goggans said.