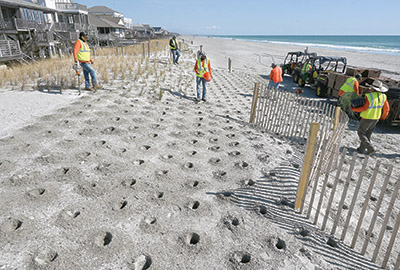 A crew is at work on the south end of Pawleys Island to plant beach grass and install sand fence in the final phase of a renourishment project that pumped offshore sand onto the beach two years ago.

The 139,062 plants are also the first phase of the town’s partnership with the Army Corps of Engineers, which is expected to provide federal funds for future renourishment on the south end and to repair major storm damage to the beach.

The sea oats and bitter panicum, known as panic grass, will stabilize the dune that was created in front of the houses as part of a $14.8 million renourishment project. It was funded by the town and the state. Although the work was initially planned with the Corps of Engineers, the town decided to do it on its own because it was uncertain that the agency would be able to start the work in 2019 when funding finally became available.

The Corps agreed to participate in the project after the sand was in place, making 1.4 miles of beach on the south end eligible for future federal aid.

The town had budgeted less than $100,000 for sand fence and plants. The Corps will spend  $764,000 for the project, according to contract documents provided by the town.

“Since its an Army Corps job, they’re very specific about the spacing,” said James Barron, the project manager for EarthBalance. The Florida-based company regularly works on Corps projects, including one in Myrtle Beach.

“In Myrtle Beach, after about two years, the 4-foot sand fence was totally covered and all the vegetation protrudes up through it,” Barron said.

The seeds for the plants his team is installing on Pawleys Island were harvested in Myrtle Beach and grown at the company’s nursery in Florida.

“We like to source locally from near project sites,” Barron said.

The plants average a 95 percent survival rate, but he added “sometimes we do a lot better than that.”

A string line marks the toe of the dune. A PVC pipe with markings every 18 inches is laid perpendicular to the string to guide the two workers who used gas-powered augers to make holes for the plants. Two others follow, one adding hydrogel to the hole to help keep the roots moist, the other with a spoonful of slow-release fertilizer that will feed the plants for a year.

Two more workers carry flats with 50 plants each and drop a plant in each hole. Two others follow with sticks to tamp the sand around the plants and eliminate any air pockets.

“These guys get in a rhythm,” Barron said.

The work would normally start with sand fence, but supply chain problems led the crew to start with the plants. The fence posts will arrive next week. The final plantings will take place between the fence sections. The work should be complete early next month.

“This is a great time of the year to plant because it’s just getting to the end of the colder winter season,” Barron said. “In three months time, they’ll grow probably by, I’d say, 6 inches or more.”

The plants alternate: three rows of panic grass, three of sea oats. Whichever finds the conditions to its liking will take over a section of dune, Barron said.

Some property owners had plants installed when the sand was first placed on the beach. Overall, it’s done well, Barron said, but his crew will fill in where it can.

Some of the plants may turn brown from transplant shock. “You can trust me when I say there are roots growing down there, and the plant will be bushy in a month’s time,” Barron said.

The plants won’t need any help, like watering, from property owners.

“That’s something we actually somewhat discourage,” Barron said. “These plants, they’re used to that environment.”