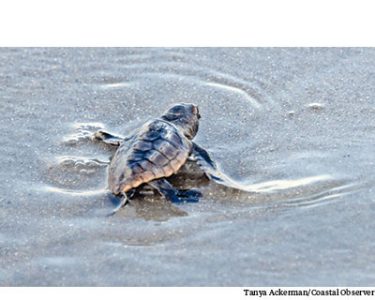 A sea turtle hatchling heads to the ocean after volunteers removed it from a nest last month.

Hurricane Dorian took its toll on sea turtle nests in the area, washing away about 45 from DeBordieu to North Myrtle Beach.

Despite the loss, it has been a record-setting year for SCUTE, with 357 nests. The previous record for nests was 226 in 2017. Last year there were only 65.

“It was a remarkable season,” McClary said.

Before Dorian passed by, 81 percent of the nests had already hatched and been inventoried. Of the 67 that were left, about 45 were lost.

Eight nests survived on Garden City, which had 35 nests this year.

“They had them on a high plateau,” McClary said.

Huntington Beach State Park lost 10 nests. It had 42 this year.

“They got wiped out,” McClary said.

A large section of dune washed away at the south end of Pawleys Island.

“It’s kind of an abrupt halt to a great season,” said Betsy Brabson, who oversees the DeBordieu chapter of SCUTE. “To only lose 11 nests is really remarkable”

One of the DeBordieu nests hatched during the storm, but only 37 percent of the eggs produced hatchlings.

There were more than 130 nests recorded in DeBordieu and Hobcaw.

“It was a great season. We did the best we could,” Brabson said. “We’re all just in finishing up mode trying to get these inventories done.”

On Pawleys Island, eight nests were lost: three on the north end, three in the middle and two on the south end.

Mary Schneider, who heads the Pawleys Island/Litchfield SCUTE chapter, said there 39 nests on Pawleys this year, breaking the old record of 25.

One Pawleys nest is left to be inventoried at the end of September.

McClary said the SCUTE volunteers who walk the beaches at sunrise will keep an eye out in the areas where the lost nests were to see if any of the eggs survived the storm.

“You find them as they emerge or you just get lucky,” he said.