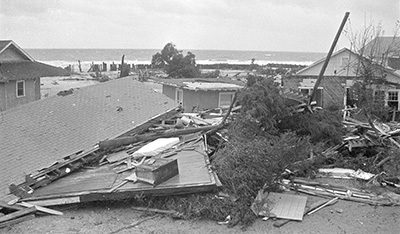 The morning after Hurricane Hugo. Beachfront homes were washed off their pilings on the south end of Pawleys Island.

The South Carolina coast was overdue for a storm. Last week it roared in with a vengeance. Seven days later there is still no count of the homes destroyed on Waccamaw Neck.

Officials estimate 100 homes were lost at Pawleys Island alone. On the narrow south end, 44 homes were destroyed between Hazard Street and the tip of the island. The spit was breached in the middle.

Winds gusting up to 140 mph raced through the Bird’s Nest, wiping out a row of 11 oceanfront homes. Some smashed into the second and third rows of homes. Others were carried into the creek.

The higher mid-section of the island fared better, but severe erosion undermined houses and sent them crashing to the beach. Among the casualties was Summer Academy, one of the island’s oldest homes.

Pawleys Pier was washed off its pilings. On the north end, at least seven homes were destroyed just north of First Street.

At Litchfield Beach, dunes were pressed flat. Windows and porches were blown away from Inlet Point. The beach washed across Norris Drive, fanning out through the streets toward Parker Boulevard.

Rooms below the beachfront homes were gutted. Portions of roofs blew back into the second row of homes.

Litchfield Inn’s ground floor rooms were also gutted. Sand swept from under the foundation caused portions of the buildings to collapse on the beach. The hotel’s seawall was demolished and the debris floated in the two pools.

Litchfield by the Sea lost dunes, but little else. The clubhouse was partly undermined and canted toward the sea.

North Litchfield’s high dunes protected most of the oceanfront houses, but they also trapped floodwaters.

Watts and Mary Stroman canoed down Parker Boulevard the morning after the storm. Water was still 4 feet deep in places.

Inland, trees were felled by tornadoes spawned by the hurricane-force winds. Creekfront homes from Pawleys Island to Midway Loop were ravaged by winds and high tides. When the water retreated, dark pluff mud remained.

Since Hurricane Hazel in October 1954, Georgetown County Civil Defense Director Eddie Carraway has been trying to prepare people for another such destructive storm. Every year, as hurricane season began, he reminded people the average for such storms is 20 years.

Ever since 1974, Georgetown County was overdue for a hit, he warned.

Hugo hit at full force around 1 a.m. Carraway said Tuesday that no one has exact figures, but that wind speed was estimated at 120 mph on the coast, “at least over 100 in the city,” with gusts of 135 to 140 mph.

The predicted storm surge was 15 to 17 feet, but Carraway said he doesn’t think it got that high.

No measurements were made of the storm surge, either.

No lives were lost, and Carraway attributes that to evacuation. For years, that was one of his major worries: whether people would leave when they were told to, and if they would leave soon enough so everyone could get out.

They did. “They got out,” he said. “The thing that pleased me so much is that the people moved when we told them to move.”

Carraway said evacuation began as early as Wednesday on a voluntary basis. On Thursday, when it became mandatory, sheriff’s deputies conducting the evacuation went to plans for a Category 3 storm, while Hugo was still a Category 2.

At midday, the order came to evacuate all areas east of Highway 17 in addition to the beaches.

Deputies and other emergency personnel helping in the evacuation were to be out of the areas themselves by 5 p.m. But by that time, Carraway recalled, Hugo was unexpectedly increasing in strength.

He said it would be a good idea to evacuate people in low areas west of the highway, but it was too late. However, deputies returned to the area and continued working, Carraway said.

He did not know that until he received a call from a resident west of the highway wanting to know if it was a legitimate evacuation order. The police and their helpers finally took shelter for themselves late in the evening, he said. By then, Hugo had become a Category 4, a storm of major proportions.

Although some who were here 35 years ago say the destruction is worse than Hazel’s, Carraway could not confirm that. He said he’s been confined to the office and hasn’t been out to see anything.

Awendaw and McClellanville, between Charleston and Georgetown, suffered the brunt of the fearsome northeast quadrant of the storm.