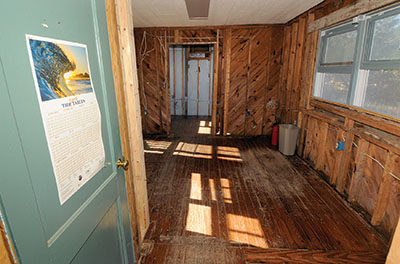 The old Town Hall was flooded by Hurricane Matthew in 2016.

Renovations to turn the old Pawleys Island Town Hall into exhibit space should be complete by early fall. Town Council this week approved the proposal from an ad hoc committee to upgrade the building and grounds at the corner of Myrtle Avenue and the North Causeway at a cost of about $30,000.
The money will be raised from private donations, said George Raftelis, who chairs the committee. “It wouldn’t put any pressure on the operating budget,” he told the council.
Town staff moved out of the building in October 2016 after it was flooded by Hurricane Matthew. A new Town Hall opened this year on the opposite corner of the North Causeway.
The six-member committee started work in February exploring ways the town could use the building that was once a real estate rental office. It was turned into the Town Hall in 1988 and expanded over the years to about 600 square feet.
“It’s a landmark,” Raftelis said.
The renovations will be modest with repairs and painting on the outside along with upgrading fixtures inside. “The biggest issue there was the floors,” Raftelis said.
Because the building sits on the edge of the marsh, it is vulnerable to future flooding. The wood floor will be replaced with vinyl planks at a cost of $3,600, the single largest expense.
Under federal flood regulations, if the renovations exceed 50 percent of the building’s value the town would be required to elevate the building. That was ruled out.
The landscaping will also get a makeover, with salt-resistant plants. With all the work, Raftelis said, the goal was to keep the initial cost and the maintenance and operating costs low.
The programs will be designed so they don’t add to the duties of town staff, Raftelis added.
The committee is working with the newly-formed Waccamaw Neck Arts Alliance on exhibits. It plans to expand those to include other nonprofits such as Hobcaw Barony and SCUTE, the sea-turtle monitoring group. It also wants to create displays about the island’s history.
The committee ruled out any commercial uses after conducting a series of interviews with property owners.
Town Council approved the plans and agreed to keep the committee in place to continue the project. The funding and procurement will run through the town. Council will have final approval of future plans.
Raftelis, a CPA who specializes in public sector financing, and Betsy Altman, owner of Pawleys Island Realty and a member of the committee, pledged a total of $25,000 to match donations to the project. That will cover ongoing operations and provide a reserve for future efforts, Raftelis said.
“What do you anticipate asking from the town?” Council Member Rocky Holliday asked.
The plan is “fully funded,” Raftelis said.
Nothing from the town, Council Member Sarah Zimmerman asked. No, Raftelis said.
“That’s what I thought, but I wasn’t sure,” Zimmerman said.